HOW DID THE 1970s WEAN YOUNG JAZZ FANS, Part Three: The Jazz Crusaders

Just getting started on jazz in the 1970s wasn't easy.  I was kid, and while I digging the likes of Clifford Brown and Sonny Rollins, I still needed some soul groove keep me from being a total dork. Because out of the great jukebox-jazz hits of the 1960s, like Lee Morgan's "The Sidewinder," there grew a more contemporary form of soul/jazz for the new decade.  And for me, this plush groove was beautifully integrated with a unique front-line sound, emotional solos played right inside the pocket, and some tasty-as-lime Fender Rhodes stylings that were, frankly, a lot hipper than all that fusion stuff.  I write of The Jazz Crusaders.

The Jazz Crusaders—initially Wayne Henderson on trombone, Wilton Felder on tenor sax, Joe Sample on piano, and "Stix" Hooper on drums—started out of Houston, Texas as a hard-driving bop unit in 1960.  Their front line of trombone and tenor was beefy and distinctive, and they played soul-infused solos that hardly seemed out of the jazz mainstream.  The group relocated to Los Angeles and made many albums for Pacific Jazz, often playing with bassist Buster Williams.  In the mid-sixties, they were fleet and flying.  But even then they had a taste for the popular, creating a grooving arrangement of "Eleanor Rigby."

In 1971, the band dropped the word "jazz" from their name, and surely many fans faded away.  They stopped properly "swinging" and began playing a style of instrumental music that leaned more heavily on soul grooves and a gospel-tinged way of playing, but this new incarnation was hardly the limp instrumental pop that would later be called "smooth jazz."

In fact, it was during this period that my friends and I first discovered The Crusaders.  They were now recording for Blue Thumb Records, and they they made a string of discs that I will always love: 1, The 2nd Crusade, Unsung Heros, Scratch, and Southern Comfort.  The sound of these discs is still unique.  The band kept that trombone/tenor front line, but they added guitarist Larry Carlton.  They still took long blues-based solos, but they became a band based around the sound of a Fender Rhodes electric piano, with its lush, bell-like chording and percussive right hand attack.  This music was accessible but still an adventure—at least it was for a bunch of Jersey teenagers who were trying to find out way into jazz and needed more than just the gorgeous mathematics of Charlie Parker or the moody brilliance of Bill Evans.  The Crusaders had some Texas stomp in their sound, but they still gave you the thrill ride of jazz improvisation.  We were hooked.

In fact, Southern Comfort was one of the first two jazz albums I bought for myself in a Sam Goody's one afternoon in 1974.  We listened to it at home while eating turkey-cole slaw sandwiches and drinking huge goblets of Coca-cola, and I still remember that my friend Bobby pronounced the music "greasy."  A high compliment.

We loved the guitar tone and slap of the funk on "Stomp and Buck Dance."  We loved the looping bass line on "Double Bubble" and also how that tune used some funky acoustic piano in the middle of the groove.  We could not get enough of the dastardly horn line syncopation of "Time Bomb," which we actually danced to.  (Don't ask.)  And, especially, I loved "Whispering Pines."

"Whispering Pines" still defies category for me.  It has one of the band's most dashing but wistful melody lines, set over a hugely melodic bass line that spins in a precise arpeggio.  Soulful but still cool, it seems like a theme that could introduce a news program or be a backdrop to heartbreak.  And the tune inspired remarkable solos from the band.  They were generous in length, and they built up slowly, rising and climaxing on a huge tide of melody.  Under the improvisations was a dodging, weaving bass line that was in continual hide-and-seek with Hoopers snare and cymbals.

What The Crusaders seemed to have perfected around 1974 was a hip music that incorporated soul into jazz, but a way that created a singular signature sound.  This wasn't music that grew out of Bitches Brew.  It wasn't "fusion" as the '70s would come to define that word.  It wasn't clinical or calculated or framed for market, though it sold pretty well.  It was genuinely soulful, and it was still jazz, no matter what name the group had adopted. 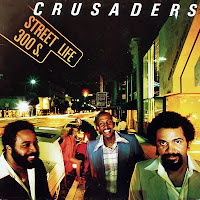 Not that it didn't all turn sour.  1975's follow-up to Southern Comfort, Chain Reaction, was good but curdled a little—synthesizers creeping in and the funk seeming more mechanical.  Those Southern Knights was obviously the moment when the fruit when over-ripe, with the guys on the cover in Lancelot outfits and then chanting the vocal on "Keep That Same Old Feelin'" in the grooves.  This was popular stuff, but my friends and I had already moved on the more challenging jazz, so that when the band's biggest hit emerged on Street Life in 1979, we didn't feel betrayed.

Once Reagan was president, plenty of things fell apart, and The Crusaders were gone before you could say "I remember Oliver North."  Henderson left years earlier, in '75, and Hooper split in 1983.  Only Joe ample remained active over the next couple of decades, finding a place for himself in the Kenny G-iverse.  At which point I'm not sure it was really any longer cool to admit how great you had found The Crusaders back when you were a kid.

The last couple of years of demonstrated, however, that a good idea never dies.  Felder and Sample recorded as "The Crusaders" again in 1991, then again in 2003.  In the mid-90s, Henderson wrangled Carlton and Felder into recording (to Sample's chagrin) as "The Jazz Crusaders."

And then, in 2010: word started spreading of true reunion dates with Henderson, Felder and Sample all in on the action again.  Almost completely under the radar, the group played at Yoshi's in the Bay Area in the spring, but then word was out that Felder was ill, and replacement reed players were in the band.  They've had dates scheduled in recent weeks in places like Milwaukee.

Personally, I miss them.  The clarity and soul of The Crusaders ushered me into caring about jazz, into listening to the stories that its players have to tell.

Next Time:  Grover Washington, Jr—Another Blast of Soul
Posted by Will Layman at 8:41 PM