My Interview with Miles's Son and Nephew

This fall marked the 40th anniversary of Miles Davis's great Bitches Brew.  It may have been controversial in its day (1970), but time has proven that the seminal "jazz-rock" album is brilliant: tuneful, rhythmically audacious, moody, and memorable.  (Listen to my spirited debate with Ashley Kahn about the relative merits of Bitches Brew and Kind of Blue right HERE from a recent edition of WNYC's "Soundcheck.")

But it's been reissued several times—I bought the box set with out-takes a few years ago.  Does its 40th warrant another reissue with concert footage on DVD and so on? 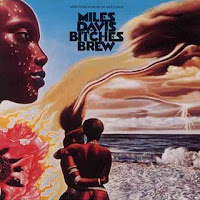 I had the chance to interview Miles nephew, Vince Wilburn, Jr., and Miles youngest son, Erin Davis, both of whom played with Miles during parts of his "comeback" period (1981-91).  My feature on BB and the Miles legacy is up on PopMatters right HERE.  They are all about celebrating the great man's legacy and continuing it into the future.  But, what with the recent release of a Dogfish Head "Bitches Brew" ale and this massive but unnecessary reissue, it's also easy to see Miles Davis as a one big piece of commerce.  That said, the concert footage included in package is stunning.

Personally, I'm about done buying Miles Davis box sets.  But I'll be listening to them forever.
Posted by Will Layman at 3:45 AM