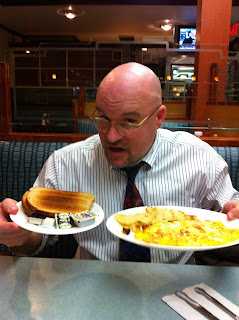 Hey—I don't normally put up anything here at Big Butter and Egg Man that is not related to jazz, or at least music.

An exception, if you will indulge me.

I just had a short story published in BETHESDA Magazine.  Not the NEW YORKER, but still I'm happy with the story, "Birds," and perhaps you would like to read it HERE.

Here are the first two paragraphs:


Timmy flew to China. He loved the little packets the airline gave us, the ones with a tiny toothbrush in two put-togetherable pieces and the tiny tube of toothpaste. He used that toothpaste for a month, squeezing it tight with his 6-year-old fingers, eking out the last minty smudge.

But his flying days were over, he told us. Only two years later, his understanding of physics had dangerously advanced.

It's about a father and son, primarily, as the father slowly takes on his son's fear of flying.  It's not too long and it's a little bit about love, so what have you got to lose?

Literary stuff is nutritious for your soul.  Like music, but with words instead of notes.  Dig in.
Posted by Will Layman at 7:31 PM