Art Blakey and the Jazz Messengers: The Sesjun Radio Shows

Between 1978 and 1983, the drummer Art Blakey had his great band, the Jazz Messengers, in serious transition. The mid-1970s had not been a great era for the band (or for mainstream jazz as a whole), and he was shaking the group out of a doldrums with an infusion of new young players. 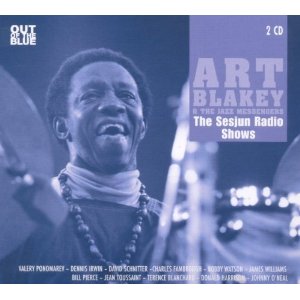 Art Blakey and the Jazz Messengers: The Sesjun Radio Shows (read my full PopMatters review HERE) brings to light three recordings of European concerts from this time that have never been released before. The music is exciting and vibrant, particularly the playing of alto saxophonist (and band music director for much of this period) Bobby Watson. Watson's solos have swagger and swing, and his sound is drenched in blues that way the sound of a guy from Kansas City should be. Watson is also a featured composer, and his "E.T.A." is one of the highlights.

Also well-represented here is the great two-fisted piano player James Williams. Williams was the most down-home Messenger pianist since Bobby Timmons, and his playing here can be both harmonically rich and simply direct. As with Watson, his tunes ("1977 A.D.", for example) are among the freshest on the date.

This record is also a reason to reconsider the Messenger legacy of trumpeter Valerie Ponomerev. He had a long tenure with the band, but I'd mostly thought of him as the placeholder until Wynton Marsalis came along in 1981-82. That is probably unfair. He acquits himself nicely in the first of the three concerts here (the third featuring Terence Blanchard, who replaced Marsalis), particularly with his ballad playing. Still, it remains that the bands feature Ponomerev and tenor player David Schnitter, while exciting, does not play with the polish and snap that would come to the ensemble once Wynton and brother Branford Marsalis came along.

But more Art Blakey is good for the world, particularly now that he's gone and jazz no longer has a mainstay such as the Messengers to be creating crackling hard bop. This release is more than welcome.
Posted by Will Layman at 4:44 AM