Success is to be devoutly hoped for in life. And if you are a jazz musician, achieving Diana Krall-level success is like winning the lottery or striking gold – a rare coming together of spectacular sales and not a little critical acclaim.

But that kind of success in art is going to be a prison more often than not. It certainly was for Krall.

Diana Krall is very good at singing jazz standards in a smoky and sexy voice, accompanied by her own deft piano and often a swinging trio or a lush orchestration. Her audience seemed to want more of that, please. She made six such records (as well as a crisp live record of the same standard material) in the decade following her 1993 debut. Then she tried something different: 2004’s The Girl in the Other Room, a collection of rock-era songs and original material that sounded only a little like jazz and nothing like her prior work. The market spoke loud and clear. She went back to jazz standards and bossa nova after that for three more discs. 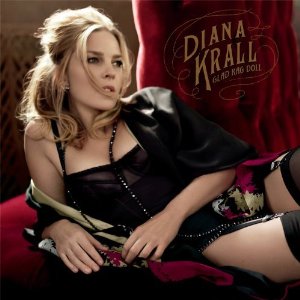 Except that Diana Krall turns out to be an interesting and searching artist. Her smoothest material was always rich in rhythm and hip phrasing, and her piano work was confident and melodic – way more than merely competent. And it turns out that she was not content to keep doing the same thing over and over again.

Glad Rag Doll is a riveting leap forward and backward at once. It leaps forward because it allows Krall to sound much more contemporary, embracing and owning for the first time a directness of expression that includes distorted rock guitars and thumping drums. But it leaps backward as well to songs from the 1920s and 1930s that include vaudeville, blues, and roots material, as well as jazz era pop songs. Glad Rag Doll is old and new, but mainly it’s fresh and bracing. It does not reinvent Diana Krall – she sounds utterly like herself here. But it makes you realize that her talent is broader than you previously realized.

Glad Rag Doll was produced by T-Bone Burnett, and it has his distinctive mark, including boasting his house rhythm section of guitarist Mark Ribot, bassist Dennis Crouch, and drummer Jay Bellarose. The groove here swings plenty when it wants to, but it also whumps and rocks and even crackles. This is not “Diana Krall Rocks!” In fact, most of these songs are decades older than Krall’s usual repertoire. But Burnett embraces the roughness and directness of that older music, and so the effect is that of Krall’s diamond-like voice being affixed to a craggy setting. And it makes her shine that much brighter.

The Betty James rockabilly tune, “I’m a Little Mixed Up”, is a perfect bit of joy. The guitars are distorted and rootsy – twangy and rocking at once – with the rhythm section playing a slap-happy backbeat that inspires Krall to play barrelhouse piano that is as lean and clutch as any Allen Toussaint performance. But there is the smooth alto of Krall’s voice, bending the melody and the lyrics too, and sounding great: close to the elemental emotion of the tune.

Or check out Doc Pomus’s “Lonely Avenue”, which has got to be the grittiest recording in Krall’s canon, with a guitar squall that storms behind her pouty voice as if Neil Young had been mischievously let loose in a Manhattan nightclub. Burnett brilliantly mixes Ribot’s banjo with feedback and thunderous left hand crashes on piano – with the whole mix getting positively atonal in a collective improvisation that takes place after the second vocal section. It is ripping good fun, but haunting too, with the leader’s vocal getting at legit blues feeling.

Read the entire review, HERE: Diana Krall: Glad Rag Doll
Posted by Will Layman at 3:15 AM