In 2001 when Shelby Lynne won the “Best New Artist” Grammy for the previous year’s I Am Shelby Lynne, she become a classic example of Grammy cluelessness—Lynne had been a professional singer and musician for over a decade at the time, having recorded a duet with no less a light that George Jones in 1988. 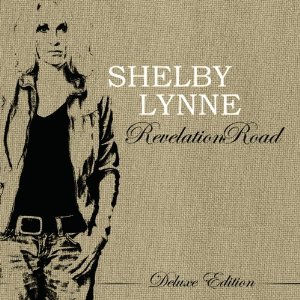 So that “new” thing was ridiculous, but the “best” part wasn’t. I Am Shelby Lynne was a ripe and wonderful record that reinvented Lynne as a country artist with unusual range and depth. With that recording, Lynne seemed not only “alternative” in that she sounded more like Lucinda Williams than like Faith Hill but also genuinely original—mixing rock and soul into her country sound with a bold clarity that contained bracing, confessional lyrics. The recordings that followed were not quite as stunning as I Am, . . . until the fall of 2011.

Revelation Road was released in October 2011, and it is Lynne’s finest recording. It’s also her most personal and most poetic. Lynne is the only songwriter here—but also the only musician. Released on her own label, this disc comes off as the most complete expression of Shelby Lynne there could be. Critics properly loved it.

A year later, Lynne is releasing a “Deluxe Edition” that includes five additional acoustic tracks of Revelation tunes or other exclusives, adding a sweet additional layer to this masterful record. If it seems too soon for Lynne to be re-selling what she released only a year ago, well . . ., maybe it’s never too early to celebrate something this good. Plus, the first disc comes in a collection with Lynne’s first live record, recorded earlier this year in Santa Monica, as well as two DVDs—another live show and a “making of” documentary about the 2011 record.

The climax of the disc is the devastating “Heaven’s Only Days Down the Road”, which seems to tell the story that can’t help but insist on itself in Lynne’s biography: the day that her father shot her mother and then himself, leaving Lynne and her younger sister (who happens to be the wonderful singer-songwriter Allison Moorer) as orphans. The brilliant stroke is that Lynne tells the story from the husband/father’s point of view, conjuring the pathos of a man who is doing a terrible thing and knows it beforehand, powerless to stop himself for tragic reasons. That Revelation Road provides one last tune, the sadly warm and generous “I Won’t Leave You” (“Oh, I can see the time / Has come for you to cry / Oh my, can’t say goodbye / Loving you’s the reason”) is just further proof of its emotional generosity.

The new music here will keep a listener happily busy for days or more. “Between the Rows” is the only new song among these bonus tracks. Like so many Lynne songs, it has uses strong and simple language to suggest a story of pain and downfall, laced with religious imagery and the landscape of her childhood home in the American south. The stabs of electric guitar and the gutty vibe of her voice more than make up for the simple acoustic backing. All of these songs combine the tough and the tender.

The live record from McCabe’s Guitar Shop is even more worth having. Lynne’s tells stories out front of several of these simple performances, putting the tunes even more in context and making them even more personal. Before singing “I’ll Hold Your Head”, she explains that she, her mom and her little sister (Moorer) learned to sing three-part harmony while driving to school each morning in rural southern Alabama. The performance of the tune is absolutely masterful—a vocal delivery that swoops and swings, rich in tone and conversational just when it has to be. When she sings “C’mon, Sissy, let’s close the door / Don’t want to hear the noise no more”, it’s plain that she is singing about the alcohol behind her parents’ tragic marriage, and the song’s title makes even more sense than when you first heard it.

Read the entire review on PopMatters at Shelby Lynne: Revelation Road (Deluxe Edition)
Posted by Will Layman at 2:57 AM