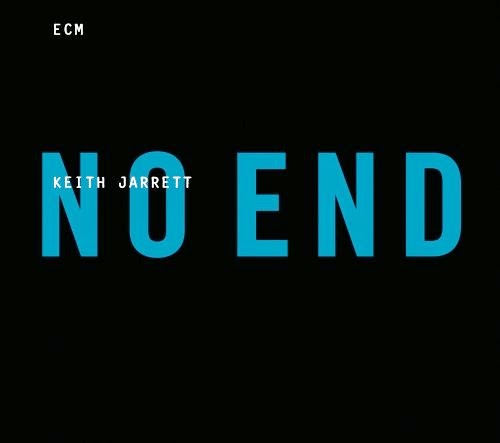 I love the music of Keith Jarrett. He has been a distinctive titan of jazz piano since the late 1960s, forging a style and a philosophy that has lifted the music higher in several ways. From his protean sideman work with Charles Lloyd and Miles Davis to his iconoclastic and fully improvised solo piano recitals, from his two daring quartets in the 1970s and ‘80s to his classical experimentations—and most recently in his determined and breathtaking playing with his trio—Jarrett is a master, a great musician, and a hero in the music.

Except when he is self-indulgent.

In the 1976, he famously released a 10-LP/6-CD box of solo piano music, The Sun Bear Concerts. More times than can be recounted, he has lectured audiences about their inability to control coughing or other involuntary noise while he is playing. And, some might argue, much of his classical crossover music (such as his 1980 release The Celestial Hawk) is only for completists.

No End lives at the far end of the self-indulgent portion of the Jarrett canon.

Two compact discs. One musician, our man Keith, playing drums, electric bass, electric guitar, hand percussion, recorder, and—occasionally—some piano. These 20 segments of music were recorded as cassette overdub jams in 1986 in Keith’s home studio, and they sound just like what they are: aimless jams that don’t really go anywhere, that don’t represent real-time interaction between listening musicians like, say, a Grateful Dead jam ought to, and that sat in Jarrett’s junk drawer for nearly 30 years.
Now this music is available to you, the crazy Keith Jarrett completist. Pull out your bong and start swirly dancing, I guess, because the only way you’re likely to dig this is if you like a hypnotic jam that loops around and around without much interesting melodic content and without much in dynamic change or rhythmic syncopation.