Keren Ann is different than most of the female vocalists being put out there by Blue Note Records. She isn't a jazz singer, nope, though her previous work has been a mixture of cabaret and chanteuse-ery. Her latest album, 101, is a full program of whispered indie-pop, an up-to-the-minute record of songs that set up little movies in your head. My full review is up at PopMatters, HERE. 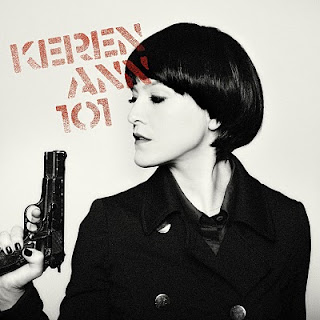 A good chunk of 101 suggests gentle folk music, with finger-picked guitars and big, open piano chords. And because Keren Ann (born Keren Ann Zeidel and a child in Israel, Holland, and Paris) sings with a limited, breathy instrument with a limited range, the whole enterprise feels even more like a kind of folk music. But plenty of songs here use synth bass, drum loops, repetitive electric keyboards and—more importantly—intelligent layers of sound that make clear that this is a different kind of project. Horns and strings are in play, but not in the way that you would hear them on a jazz or adult contemporary disc. Instead, Keren Ann deploys these sounds as subtle pads of sound that build up throbbing atmosphere.

The New York Times, in a recent magazine profile on Keren Ann, called this music "Gansta Folk", but I think they got it wrong on both counts. Sure, there is a song here that imagines the performer on stage pulling out a gun and shooting up the whole music hall. (And, of course, note the album's cover.) But other songs are as likely to detail a distant marriage or some other novelistic topic.

101 is a healthy piece of intelligent indie-pop. It brings to mind The Flaming Lips or The Decemberists much more than it suggests a hip hop poseur. It doesn't need a catchy new moniker. Blue Note put out a good piece of fresh pop music rather than jazz, and it works.
Posted by Will Layman at 3:56 AM