When it comes to guys singing jazz in 2011, Kurt Elling is King.  Since his 1995 debut, Close Your Eyes (Blue Note), to 2009's Dedicated to You (Concord), he has been daring, solid, and utterly identifiable.  Brimming with technique that draws equally on Sinatra and Mark Murphy, the guy is a jazz singing superstar, and yet he has also been quirky and off-beat.  You could hardly ask for more. 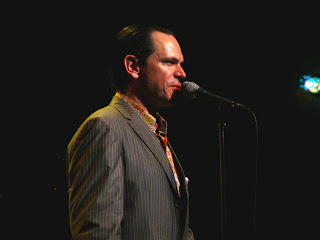 The Gate mixes "new standards" by the Beatles, King Crimson, Stevie Wonder, and others with jazz classics by Miles Davis and Herbie Hancock.  But with the vogue for this kind of Jazz Singer Does Rock! long past, this is no gimmick.  Along with super--producer Don Was and longtime accompanist Lawrence Hobgood, Elling finds all sorts of elastic swing or syncopated funk in these pop songs, and he delivers them with soaring, daring power. 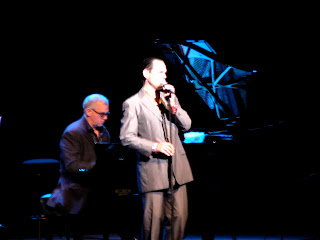 Even the most familiar songs take on a delicious new flavor.  "Norwegian Wood" gets a whole new rhythmic feeling.  Joe Jackson's "Steppin' Out" sounds much like the original, but Elling flats one note of the melody to sour things wonderfully, then he deconstructs the songs like Picasso after a key change.  And best of all, many of the arrangements are flavored by flashes of overdubbed harmony that jar the listener out of what we usually expect from a jazz singer.  Hancock's "Come Running to Me," for example, sounds like a fully new direction for Elling because of the way the vocals are layered into a sinuous texture.

Throughout, Hobgood's solos sparkle.  Bob Mintzer contributes some color on saxophone, and the occassional guitar solo is distorted rather than clean.  But the main attraction remains Kurt Elling's dramatic baritone moving confidently through songs of real quality, finding the nuance or the beauty in them, and opening up new vistas.  The Gate seems as good as gets in jazz singing these days.
Posted by Will Layman at 3:55 AM