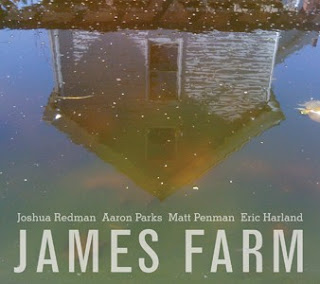 James Farm is a collective recording from four potent young jazz players that attempts—and utterly succeeds—at making instrumental jazz that is catchy and fun to hear while still offering serious pleasures in the originality of its compositions and the verve of its improvisations.

The band James Farm consists of saxophonist Joshua Redman, pianist Aaron Parks, bassist Matt Penman, and drummer Eric Harland. Redman was a young phenom in the early 1990s and has since led a series of bands that have concerned themselves with making the “jazz tradition” relevant to and mixed with more contemporary sounds. Each member of the rhythm section is also a leader and recording artist, but it may be most useful to note that this trio was a heart of Parks’ brilliant 2008 debut on Blue Note, Invisible Cinema. That recording superbly generated a grooving vocabulary for the new century’s jazz, working elements of hip hop rhythm and rock expressionism into a precise and dazzling jazz hybrid 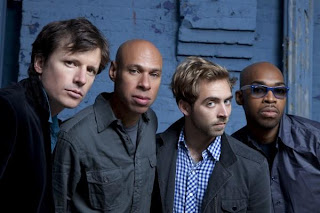 James Farm places Redman’s expressive tenor saxophone into this trio’s shimmering, exciting world. Using compositions from all four members of the group, James Farm sounds like another step—another leap—in the right direction. Each song establishes a scrambling, skittering rhythm that pushes and pulls in an exciting way. Harland almost never plays a “swing” beat, but he infuses the backbeats and sharp accents of modern rock and hip hop with a loose-limbed elasticity that is, nevertheless, pure jazz. Penman plays with economy and melody, and Parks continues his ascent: sounding just a little like Keith Jarrett at times, but more often playing with a jittery freedom that is all his own. His piano patterns dominate many of these tunes, and his sparse but dramatic use of a few other keyboards is smart and wise rather than cheesy.