Madeleine Peyroux: Standing on the Rooftop

I recall clearly hearing Madeleine Peyroux's debut at a party 15 years ago. "Is that Billie Holiday? With an electric guitar?!?" I thought that someone had sampled a Billie vocal and built some kind of psudeo-jazz modern arrangement around it. But, nope, it was this American singer, 22 years old, who'd been singing on the streets of Paris for a while and now had made her debut album. And she just happens to sound exactly like Billie Holiday—every melodic tendency, the timbre, the rhythms, everything. Is that legal? I recall thinking.

Madeleine Peyroux is still doing it. Standing on the Rooftop [read my full review on PopMatters HERE] is the singer's sixth recording, and it's a mess. It was produced by Craig Street, who did wonderful things for Cassandra Wilson when she started with Blue Note, and who gives things his signature moody touch. Songs were co-written with Bill Wyman and Jenny Sheinman (the jazz violinist). Alan Toussaint and M'shell N'degeocello play. There are covers of the Beatles, Robert Johnson, and Dylan. But the album wastes all this with an unfortunate aimlessness. 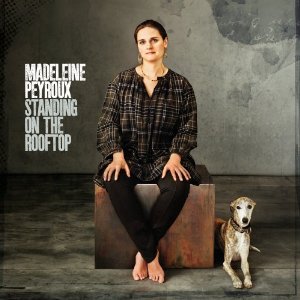 It is hardly original to note that Peyroux’s singing is eerily—queerly—reminiscent of Billie Holiday. But on her sixth record over 15 years, this persistent truth can’t be ignored. Peyroux applies an oddly “different” approach to many songs here, but she does it with a recycled sound that is, of course, a faded Xerox of the original. So, when Standing on the Rooftop starts out with “Martha, My Dear”, you’re glad that it does not sound like The Beatles—but were you expecting to hear “silly girl” come out of the throat of Lady Day? And it sounds like a kind of odd Holiday: Billie on Ambien, falling asleep in the middle of “when you find yourself in the thick of it”. It is intimate singing, I suppose, but I think it’s more accurate to call it weak and faltering.

Where does Peyroux sound more contemporary or more like “herself”? Ironically, “The Way of All Things” has a neat little swing rhythm but seems to liberate the singer from sounding so affected. It’s a cool tune that evokes her Parisian background to some extent. Even better is the tune co-written with Wyman, “The Kind You Can’t Afford”. Given a snakey little funk feeling, replete with snatches of wah-guitar, this tune is playful and funny. The lyrics compare the narrator’s low-rent tastes to those of a rich rival (“You got art collections, I got comic books /  You use plastic surgeons, I stay the way I look”) but she has “that real good lovin’—the kind you can’t afford”. Peyroux punches the lyrics and talks and sells it all with some natural zing—a huge relief from the vocal posing that dominates the record.

What could be variety comes off as grab-bag variation. “Meet Me in Rio” tosses in a bit of pseudo-bossa-nova strutting, while “Standing on the Rooftop” has a pulsing indie-rock plainness. Jazz, folk, country, a touch of funk: all wrapped up in that Billie Holiday imitation. It seems bewildering rather than variegated, aimless rather than genre-bending.

Madeleine Peyroux is an artist literally without her own voice. Borrowing from one source heavily and dabblingly from myriad sources, her Standing on the Rooftop is the sound of nothing so much as hip confusion
Posted by Will Layman at 4:54 AM