Further Explorations, is a play on the 1961 LP from Evans, Scott LaFaro and Motian, Explorations. It’s a perfect title because the new record both comes from that early Evans conception and never feels trapped by it. As with the template, Corea/Gomez/Motian share the musical space equally, creating breathtaking jazz democracy. But there is very little sense that the group consciously restricts itself to some notion of a “Bill Evans style”. The early Evans trio is strictly a springboard, and then it’s off into the sky. 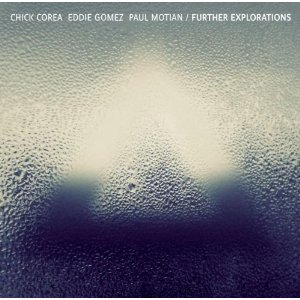 The trio’s take on “But Beautiful” is a prime example. This Jimmy Van Heusen song was introduced by Bing Crosby in Road to Rio (1947) and later recorded by Billie Holiday, Nat Cole, and Doris Day before Evans got to it—but for modern jazz players Evans essentially defines a delicate, impressionistic take on this tune.

The new version here begins with Gomez playing a classical-tinged bowed solo that begins freely away from the melody and then brings us in. In “Part II”, Corea takes the baton from the bassist as a solo pianist and brings the trio into a swinging, mid-tempo exploration. The piano references the melody in places but not much, with Motian playing his standard but fragmented version of swing and Gomez providing accompaniment that is better heard as commentary, with dramatic bursts of plucked melody rising through the conversation every few bars. When Gomez takes his proper solo, it’s Corea who is impossible to suppress, and finally the song moves into a final phase where the rhythmic play becomes more complex. It is decidedly not a fragile ballad performance that another Evans imitator might cook up. Thank goodness.

Read by full PopMatters review of the disc here: Chick Corea / Eddie Gomez / Paul Motian: Further Explorations
Posted by Will Layman at 3:29 AM