Remembering Paul Motian: The Drummer Who Quietly Shook Things Up

Late last year, jazz lost one of the quiet guys, the subtle guys, the guys that only insiders are really in love with. But it hurts more because he wasn't a famous jazz musician. You mourn his loss more quietly—which in Paul Motian's case is exactly the right way. You know that for those cared about this music, the hole he leaves in the scene is huge. Particularly in New York, which is where he exclusively played in the last years of his life. 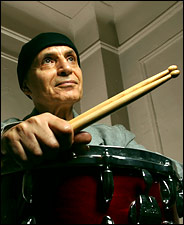 I saw Paul Motian for the last time in on the first Friday in September. He was, of course, playing a gig at the Village Vanguard, New York's temple of mainstream jazz, with his "New Trio", a band that jazz folks wanted to see. Paul's other band are legion—it seems like he became much more prolific in the last ten years, composing like mad, forming great bands, showing up on critical recordings by others.

I brought my daughter to this gig, which makes it stick in my memory that much more.

As was typical of Motian over the last three decades of his art, he played very little straight “time”. Rather, he was engaged in a continual conversation with the guitar and tenor, which is to say that he was playing a conversational and independent counterpoint to his own compositions and arrangements. He played not just time and accents but contrasting and complementary melodies and rhythms, often seeming more sculptor of sound and texture than merely a “drummer”.

This was Motian’s revolution.

I had no idea that Motian was ill, suffering from complications of myelodysplastic syndrome, a blood and bone-marrow disorder, which killed him in November 2011. Motian had seemed old, or let’s say “distinguished”, for a long time—but never less than vital. In fact, he was the rare artist who seemed to be getting larger and more varied over time. In the last few years I had seen him or listened to him in musical conversations with young players like Greg Osby and older players like Lee Konitz. In the best sense, he was the most alive jazz musician on the scene.

Like Miles Davis, Paul Motian was said to use silence very effectively in his art. But 22 November brought too much.

Read the rest of my tribute to Paul here: Remembering Paul Motian: The Drummer Who Quietly Shook Things Up
Posted by Will Layman at 3:20 AM