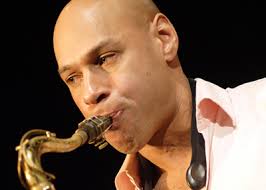 In 1994, Joshua Redman was the “It Musician” in jazz – a young guy getting a ton of press because he was a biracial guy who had gone to Harvard and decided to pass up Yale Law School for the life of a jazz musician. Plus, he was the son of the great tenor saxophonist Dewey Redman and took the top prize in the Thelonious Monk Saxophone Competition in 1991. Oh, and the guy could really play – boasting a rich, round tone on tenor and a natural, conversational style that was utterly appealing. All this resulted in a major recording contract, rare for almost any jazz musician, on Warner Bros. And the young player delivered with a debut that showed him as equally adept at “Body and Soul” and “I Feel Good”, then a sophomore effort where he played even-Steven with Pat Metheny, Charlie Haden, and Billy Higgins. The hype was not all hype.

For his third release, 1994’s just-rereleased Moodswing, Redman recorded with his working quartet. And it seems fair to guess that Warner Bros. decided to reissue this record because of that band. Pianist Brad Mehldau has become not only a top-flight jazz pianist but also a phenomenon of his own – a daring recording artist who tackles classical material and fascinating pop hybrids. Christian McBride has become jazz’s most prolific bassist, a man for all seasons and all styles. And Brian Blade has become not only the drummer in Wayne Shorter’s adventurous quartet but also an ingenious composer, arranger, and collaborator across musical styles. In retrospect, it is an all-star band, a supergroup. So how does Moodswing sound 18 years later? And how well does it fulfill its own mission, stated in Redman’s high-toned liner notes, to demystify jazz a bit, to rescue it from being seen only as an “intellectual music” and, instead, create feeling?

Without a doubt, Brad Mehldau is the secret ingredient on this disc. “Chill” finds a groove that lives somewhere in the Pink Panther/”Fever” zone: slinky and blue, set low in the tenor’s range, the bass and piano playing a lovely descending pattern. It’s a theme that isn’t, in and of itself, all that interesting, but it sets up the soloists just fine. Here is where the young Mehldau does his damage –playing light and easy, but with a melodic invention that is exceptional. It’s a solo that you might play for a skeptical friend who “doesn’t like jazz” and maybe win a convert. And when it’s Redman’s turn, things get interesting in a different way: the band sets of simple syncopated groove with no harmonic motion, and then the tenor and McBride’s bass trade blues rips. Nice.

Moodswing is appealing, but not anything truly new or daring for a jazz quartet to pull off. And that is where any judgment of Moodswing probably has to land. It’s terrific music, but it is played over well-traveled territory. In jazz, that’s common and just fine, but it doesn’t really live up to Redman’s liner-note manifesto in emotional directness. As great as the band is, with a vintage that now spins our heads, in 1994, this was a young working band making its first recording. I’d call it lovely but not essential, incredibly fun but not ... moving. Not that it doesn’t make me feel something. Good jazz always does. If that’s not true for every music fan, I’m not inclined to lay it at the feet of a single saxophone player, particularly one with such range, tone, and ambition. Josh Redman was under no compunction to lead a movement. Moodswing shows how fine even a merely good date is by a strong player.
Posted by Will Layman at 4:03 AM