I like my jazz with some whimsy when possible, but that doesn’t mean it can’t be deep. Matt Wilson’s band, Arts & Crafts, fits this bill to a tee. They are loose and fun, but also capable of great emotion and subtlety. What a relief in a style of music that, too often, seems about precision and grandiosity. Wilson ambles and takes detours as a drummer, and his band follows. It’s a casual stroll, but the destinations are substantial. 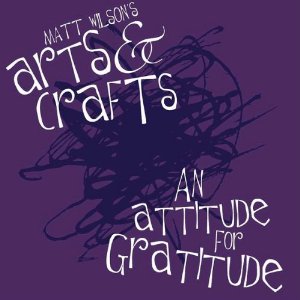 Arts & Crafts consists of veteran trumpeter Terrell Stafford; the pianist, accordionist, and organist Gary Versace; new bass player Martin Wind; and the leader on drums. Wilson does not lead by being the loudest player but rather with a willingness to infuse his playing with a human looseness. It might be unfair to call his playing “messy”, but it has a spontaneous, shambling character that refuses to be straightened out by strict rules. The result is a band that has many modes and moods, each of which is truly genuine. Although we’re talking about instrumental jazz here, the music on An Attitude for Gratitude has heart and humor and soul.


Nearly half of the tunes on Gratitude are original, and all carry water. Aside from “Bubbles”, there is the bouncing Versace tune “Poster Boy”, which allows the pianist to unspool a great line of modern jazz that culminates in a set of jagged chords leading to a hypnotizing bass solo. Wind’s “Cruise Blues” is pure relaxation, and Wilson’s “No Outerwear” has an easy swing that could be fruitfully covered by a big band. Wilson drives it with authority, and then he even gets in a quick drum solo –clacking away like an old pro. His tune “Stolen Time” is the most open thing on the record: a form that turns some fast swing into an open plain of semi-organized freedom. Wilson gets to fragment his playing as the rest of the band gallops out over the landscape and plays with abandon.

“Play” remains the operative word with Matt Wilson’s Arts & Crafts. This is jazz that emphasizes a sense of childlike wonder. The full range of emotions is here, not just blues or ecstasy and especially not merely nostalgia. Matt Wilson is working, freely and with great pleasure, in the here and now, where jazz has always been at its best.

An Attitude for Gratitude has its finger, easily and pleasantly, on the present pulse.
Posted by Will Layman at 3:15 AM