NRBQ: We Travel the Spaceways

NRBQ is a little band, a band many folks have heard of (or even heard in concert) but with not one hit song and not even really a defining album. Instead, this is a band defined by brilliant, eclectic live shows, but ones built not on self-indulgent jamming but on tasty morsels of great songs and a stylistic range that takes your breath away.


In 2012, NRBQ’s line-up contains only one member of the pre-2004 band—the singer, songwriter and Clavinet master Terry Adams—but its spirit lives on clearly. We Travel the Spaceways is from a 2011 live show in Bearsville, NY, and it catches the group in its madly varied glory. The title track is a famous tune by the jazz fantasist and avant-garde figure Sun Ra. The group also assays “Bye-Ya” by Thelonious Monk over a tub-thumping groove, and it even covers the old Claude Thornhill theme song “Snowfall”. But no jazz record this, as unique and fine as these jazz adaptations may be. 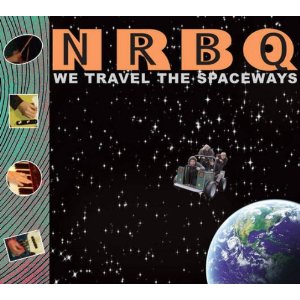 There is Beatle-rific pop-rock; lick-heavy groove tunes; odd, almost 12-tone-ish piano music; roots-rock shit-kicking songs; harmonically complex ballads; and even fairly simple blues rockers. Which is to say, this is an utterly typical set by NRBQ. Throw in some saxophone solos, leaven with loosey-goosey vocals—and don’t neglect either humor or sincerity.

The question for fans of the Q, if they haven’t seen the band in a while, is whether this is still really NRBQ. After all, Terry Adams would seem to be the only “real” member these days, and he was basically touring with this band a while back without calling it “NRBQ”—so what is the actual product here? And if it’s true that Adams was in many ways the Q’s backbone, he was also always their backbone of eclectic weirdness—the guy bringing into the band songs like “We Travel the Spaceways”, for example. So, fans might wonder, is this album NRBQ set wildly loose?

The first track is a hummable lovely from 25 years ago, the catchy “The One and Only” from the pen of Adams, yes, but also the departed Joey Spaminato whose inimitable vocal delivery turns out to be . . . fairly imitable by one of the new members of the band. Of course, Adams’ Clavinet powers the whole delightful thing, and Scott Ligon’s guitar turns out to be a jazzy, round-toned treat on a brief solo. Spaceways sounds just like NRBQ from the start.

“Here I Am” is new song by Adams and Ligon that sounds like it could have been penned by Lennon-McCartney in 1965, including some charming “oooooh”s and a gentle near-surf beat, with the vocal reaching up to strain gently in the third verse. “Yes, Yes, Yes” is even better, an Adams tune that starts with a tricky solo piano passage, blossoms into a tender ballad, and then morphs on the bridge into something knottier, leading to a strange and even disturbing synth solo that—by dint of sheer peculiarity—turns out to be perfect. Because when NRBQ gets tender it just about breaks your heart (“Ooh, I want you to know how I feel . . . Ask me do I love you? Do I? Yes, yes yes”) and then they throw in a smirk. It’s exactly why rabid fans love them so and, of course, exactly why they’ve never really made it big.

To round out the proceedings, there are other treats and random acts of musical fun.  Read my full review on PopMatters here: NRBQ: We Travel the Spaceways
Posted by Will Layman at 3:09 AM