Shawn Colvin: All Fall Down

The singer-songwriter Shawn Colvin is blessed with a wondrous voice – a clear but distinctive, confessional but ringing instrument that lends all her music a signature sound of hip intimacy. However, her best work is less about her performances than about the stories she tells and how she matches them to bracing, unique melodies. Her best record is still 1996’s A Few Small Repairs, which won Grammys and leveraged Colvin’s pop instincts such that she no longer seemed like a folk singer and more like the adult version of a star. That was certainly a grown-up hit record: an album about the bitterness and sadness of going through a divorce and maybe one of the best on that topic since Dylan’s Blood on the Tracks. 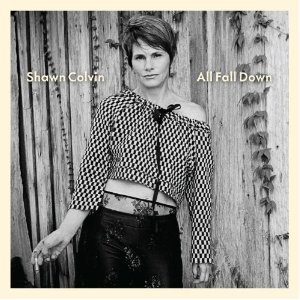 All Fall Down is another break-up album, but one softened and mediated by time. Colvin is in her mid-fifties, and her response to romantic failure now is less angry and invigorating than it is sad and resigned. Rather than kick her betrayer out of the house, as her narrator did in the rockin’ “Get Out of This House” from ’96, the opening/title track on All Fall Down simply finds the narrator shaking her head at the sad truth that, “The best of ’em wind up / Sweepin’ dirt off the street / And the worst of ’em end up / Right back up on their feet.” Not that “All Fall Down” doesn’t have punch, but it’s a slap that sounds like Colvin wants to give herself for being too naïve.

The blame also goes back to one of Colvin’s protagonists on “Knowing What I Know Now”, which features a soulful arrangement that takes perfect advantage of the production team. The guitarist and mastermind is the great Buddy Miller, who sings the killer low harmony part here. The rest of the core band is Victor Kraus on bass as well as jazz-Americana guitar hero Bill Frisell and the jazz drummer Brian Blade – with the whole shebang recorded down in Nashville. As Colvin sings, “Would I ask a seeing man to go blind? / Would I ask a sane man to lose his mind? / Could I expect you to come back somehow? / Knowing what I know now?”, a metallic-sounding Wurlitzer electric piano also fills the sad, painful space. It’s a brilliant track.

Read my my full PopMatters review here: Shawn Colvin: All Fall Down
Posted by Will Layman at 3:09 AM