Eri Yamamoto Trio: The Next Page

I like this trio, led by the lyrical pianist Eri Yamamoto. Here, she produces ten engaging melodies for improvising—often wheels that spin around in your head, hooking you. This is modern jazz playing of high quality—with improvising that tells stories, probing the harmonies and moving like a rush of momentum at the right moments. 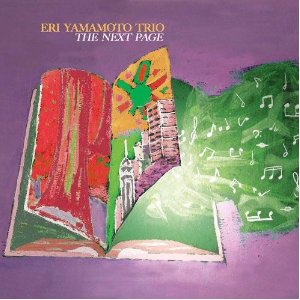 The band has been together for just about forever in modern terms: with a decade-long standing gig at New York’s Arthur’s Tavern. Bassist David Ambrosio is soulful on every tune, and drummer Ikuo Takeuchi keeps time while still being playful about it. They are not an overwhelming unit like Keith Jarrett’s Standards Trio, not a fleet-footed outfit like Brad Mehldau’s trio, nor a band that is playing with modern pop forms like the trios of Vijay Iyer or Jason Moran. Rather, you can picture them on their home turf, keeping matters intimate but engaging.

That’s all great. But the group’s most recent recording, The Next Page is perhaps a bit too nice. Yamamoto’s great distinction on previous recordings may have been her ability to be both genial and somewhat avant-garde at once—a blend of refreshing freedom and down-home appeal. True to her history, she was a pianist both in love with a great mainstream influence (Tommy Flanagan) and the pianist in out-bassist William Parker’s freewheeling quartet. This kind of sweet-and-sour combination made recordings such as 2008’s Duologue among the best of the year.

The new record is congenial to a fault. It opens with a string of sweetheart songs—like, on the title alone, “Sparkle Song”—that leave plenty of open space around their mostly simple, diatonic melodies. “Whiskey River” has a melancholy sound, but is a blue kind of pleasure for sure: quiet and contemplative but also wound into circles of slow ecstasy. “Night Shadow” has a similar appeal, with a slinky, almost Pink Pantherish blues melody that leaves plenty of room for discussion while never really leaving the key center. There are snappier tunes as well, such as the hip, backbeat-heavy “Waver”, or the clattering “Swimming Song”, which uses a gospel groove to set up Takeuchi for plenty of busy accompaniment.

But what never seems to come along on The Next Page is a tune that leads Yamamoto or Ambrosio outside the expected. “Just Walking” uses just a repeated bass line as its melody, which would seem to invite a freer form of exploration, but the pianist keeps her harmonic choices relatively mainstream here, despite the open-ended possibilities. It’s an exciting performance, with plenty of daring without mainstream forms, but just a tad tame for a player with Yamamoto’s history and young pedigree.

Read my full review here: Eri Yamamoto Trio: The Next Page on PopMatters.
Posted by Will Layman at 2:52 AM