Kenny Garrett: Seeds from the Underground

Seeds from the Underground boasts the sound of a tight-as-a-glove small jazz group, one that has played together for a while and knows how to let the sparks fly. Every tune here is an opportunity for ecstasy. Every solo tells a story. Fireworks or feeling are where every sequence is heading. This is straight-ahead jazz with the emotions turned up. 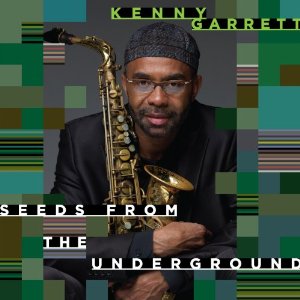 The sound of this band is generous. The Venezuelan pianist Benito Gonzalez is a maximalist, fusing plenty of world rhythms with his massive post-bop jazz chops, sounding occasionally like Herbie Hancock and more often like McCoy Tyner, but always like a young monster. Nat Reeves plays fat-toned acoustic bass, and Ronald Bruner is splashy and vibrant on drums. Then most tracks add Rudy Bird on percussion, who blends integrally with the jazz vibe, not seeming merely tacked on like too many percussions on straight-ahead dates. And, finally, several tracks add to the melodic ensemble some (mostly) wordless vocals by Nedelka Perscad—a great, soaring sound.

Here is the full PopMatters review: Kenny Garrett: Seeds from the Underground.

Most typical are the up-tempo workouts on Seeds. “J. Mac” (for Jackie McLean) is a rollicking modal tune that features thundering piano chords and a straight-ahead swinging feel. Garrett takes the first solo, and it is plain that he is charging up the hill at full speed, headed for the summit. As usual, the leader’s tone is pungent in the low register and squawking and raspy heading into the upper octave—in short, delicious. The solo builds to a peak of longer held notes, then it reloads into swirls that spin even higher. It is exhilarating. Or check out the opener, “Boogety Boogety”, with Bird percolating out front in a hip Latin groove that positively screams “Happiness!” Gonzalez’s solo here dodges and dances with smooth daring until it rises up on a series of upper register tremolos and fizzles back to the melody. Tasty.

Seeds from the Underground is not Kenny Garrett’s best record—he’s been around since the mid-1980s and has made a consistently solid string of records include several that aim higher than this one—and Garrett almost always achieves his goals. But Seeds is so satisfying because it is meat and potatoes jazz from a real working band and from a leader who never gets cute or pulls punches.

This is driving, cooking jazz—old school if you will. And that’s never been easy, even if the greats make it seem so.
Posted by Will Layman at 3:13 AM