When the Dirty Dozen Brass Band got started 35 years ago, there wasn’t much popular call for such bands. By the early 1980s, the Dirty Dozen had not only revolutionized the genre, but they had also brought it back to a level of fascination. Appearing at parties for The Rolling Stones, at major festivals in New York and Europe, and then releasing an original debut disc in 1984, The Dirty Dozen brought the New Orleans brass band tradition to a fresh new audience.

And other brass bands followed. But 35 years later, it is also apparent that no band is quite them. The Dozen created a crisp and hip brass band sound for a new generation, no doubt, but they also fused the tradition with funk and modern jazz, managing to create a sound both more sophisticated and more earthy. 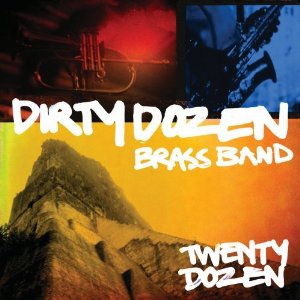 The band’s 20th album features just about everything that folks love about the Dirty Dozen. There are hip original tunes, traditional workouts, dashes of international flavor too, but also a heap of funk and soul amidst the rough-and-tumble New Orleans syncopation. It’s not the best of the Dirty Dozen — it’s maybe a little too clean in a few spots, tamer than it might be, but still a good-time groove for sure, a New Orleans party but more, a delight.

If you haven’t been following Dirty Dozen since their early years, then you need to know that they moved, a while ago, away from the purer place where they started. I remember dancing around my 1980s living room to their version of “Li’l Liza Jane”, just brass and parade drums and shouted out vocals — New Orleans Bliss with just enough bebop mixed in to please my modern jazz soul. They were always doing bop amidst the killer brass band textures (just check out their “Moose the Mooche” or “Oop Pop A Dah” from 1989’s Voodoo), but in the 1990s, they added a more modern rhythm section to their groove — a real drum kit, electric bass on occasion, guitar and organ — and they were ready to mix traditional tunes and forays into more modern sound.

The Dozen’s last album was 2006’s chilling and wonderful song-by-song, post-Katrina cover of Marvin Gaye’s What’s Goin’ On, a stunner and minor masterpiece that mixed in contributions from Chuck D, G Love, Bettye LaVette, and Guru. If politics and social justice don’t play a big part in pop music these days, then it’s not something to hang on the Dirty Dozen. Their What’s Goin’ On was the best record of the band’s career.

Twenty Dozen is not nearly that ambitious or excellent, but it still represents considerable range and enjoyment. The headline, certainly, will be the cover of Rihanna’s “Please Don’t Stop the Music”, which seems just about perfectly made for the brass band form, including the hip “sampling” of that great lick from Michael Jackson “Wanna Be Starting Something” — all brass punch and sputter. It’s great, with guitarist Jake Eckert playing a figure that almost sounds South African, while the whole thing shakes and jiggles with more dance cred that the original. The tenor solo, which climaxes on a couple of overblown high notes, is by Kevin Harris.