You want some powerful real music, the kind of music that shamelessly moves at you with emotion and soul? Is this just the tonic for you, what the doctor ordered, the sort of juice that might put hair on your chest or perhaps a skip in your step? 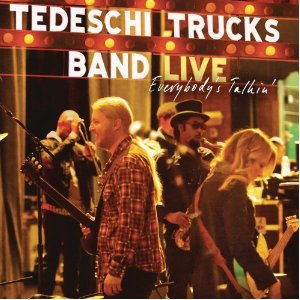 Well, let me recommend something in a husky yet pliant singing voice, good with a ballad like “Midnight in Harlem” but also game and glorious on an Elmore James blues like “Rollin’ and Tumblin’”. Let me suggest that such a voice—owned and used with authority by the lovely Susan Tedeschi—is just the ticket to getting your temperature rising. It growls and shouts as necessary but is equally capable of a caress. And this quality, of being multifaceted in a world that prefers pigeonholed pop stars who sing the same song over and over again, it’s too rare lately. It’s great.

I might also suggest that you try on something in a stunning electric guitar player. Not just a guitar that is fast or loud or flashy, though Mr. Derek Trucks is all those things when he chooses to be. But rather, I suggest you look into the kind of guitar that speaks—that sings—like an actual human voice. A slide guitar that moans and bends tones and a blues guitar that lives between diatonic notes and a jazz guitar even that moves in surprising harmonic twists when surprise or coloration makes sense.

Is that a big mess of description? Then just tune in to “Nobody’s Free”, a ten-minute stretch of live music that lets a guitar do just about anything that a guitar could want to do. It could want to start with a screaming set of jacked-up chords that rip and roar, then move into gentle finger-picking that accompanies the soothing-to-gutbucket vocal. And it could play a greasy figure behind the horns in ripping unison. And it could then let the rhythm section get out of the way, be very very quiet, and begin a sculpture of a solo that starts from a few squiggled notes, moves into dramatic blues figures mirrored in near duet by electric bass, and then trades a daring figures with the drummer before ending in a set of jazz-drenched twists and turns. And what if I then told you that the guitar playing underneath the subsequent flute solo was, if anything, even more subtle and astonishing: the kind of hip and detailed rhythm playing that is so good that it almost constitutes a “solo” unto itself—a jittery, complex, riveting set of scratches and chops and thrums that frames the horn perfectly?

Yup, that Derek Trucks can play.

Read the entire review here: Tedeschi Trucks Band: Everybody's Talkin
Posted by Will Layman at 3:34 AM