David Virelles is a relatively young pianist, born and raised in Cuba, with a second recording that extremely interesting and ambitious but not easy to listen to with anything less than total concentration. 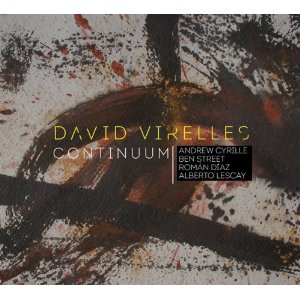 Continuum features an unusual quartet, and it’s fair to say up front that this music is best not thought of as “jazz”—but maybe not as anything else exactly either. The band is a conventional jazz trio of piano and keyboards, bass (Ben Street), and drums (the veteran inside-outside player Andrew Cyrille), supplemented by Roman Diaz playing traditional Cuban percussion and chanting in Spanish and other languages that feed into the Afro-Cuban tradition. The art being made here is nothing like the standard jazz set—tunes that feature improvising in between statements of the melody.

Instead, Continuum sets up systems of rhythm, texture, melody, and sometimes language. Most tracks are relatively brief, and the contrasts between “songs” and the sequencing of each statement create what feels like a story being told across the breadth of the collection.

Your ears are likely to travel over this music in a searching kind of way. I found myself transfixed by each track, at least for a while, as Virelles’s precise pianistic touch or his penchant for novel keyboard sounds (from a harmonium, a pump organ, and an electric Wurlitzer organ) drew me to riveting musical notions. As each idea takes hold, however, it also seems to let go. Themes are stated vaguely and then waft into the air. Structures are non-linear or not repeating. The hunt for connection is hard work.