Joe Lovano has a burly, garrulous way with his tenor sax, a big man’s style around the horn that is nevertheless nimble and athletic. His touch can be light, but the overall sound of a Lovano band is wide and generous. And that’s certainly true of this latest release from the leader’s working quintet. Us Five has that big sound: James Weidman plays piano with a sprawling expansiveness, either Esperanza Spalding or Peter Slovov lays it thick on bass, the dual percussion attack of Otis Brown and Francisca Mela covers everything, and then there’s the inclusion on some tracks of guitarist Lionel Louke. 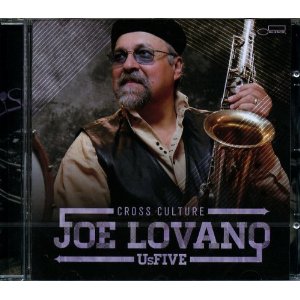 Another way of thinking about it is that Cross Culture is a bit of a mess. Not a bad mess, but kind of a cluttered affair—lots of sounds moving all around in the sonic space. On “Myths and Legends”, the cymbals clatter and the bass dashes as Lovano meanders all around the place—it’s like a conversation that goes in five directions at once. “In a Spin” states a choppy stop ‘n’ go melody for tenor and guitar and then—b-zam!—the band starts into a series of solos that careen over an idiosyncratic lurching rhythm. Lovano puts in some parts on his crazy Aulochrome, a polyphonic saxophone that can play two (kind of purposely out-of-tune) notes at once, and there is a long passage of dancing counterpoint for Louke and the leader. It’s nervous music. It unsettles you a bit.

All of which makes it sound like I don’t dig this band. But I do. This is a fleet and liberating group. While they are not doing anything revolutionary (compared to, say, Wayne Shorter’s current quartet, they seem relatively traditional), this band plays with freedom and a natural ease. Nothing is too formal or stiff. On “11PM”, the rhythm section simply cooks while Lovano plays a fluent vocabulary of free-bop around them. Louke enters on guitar, they joust, then Weidman is stabbing behind the leader on piano, and eventually he takes a jagged solo. Tempos shift and bend. Anything might happen because the structures are built to be loose from the start. “Journey Within” has the feel of an Ornette Coleman tune because the melody is stated by Lovano (on soprano) and Louke in a unison that is purposely out of sync.

Read my full review on PopMatters, here: Joe Lovano Us Five: Cross Culture
Posted by Will Layman at 5:19 PM