Wayne Shorter Quartet: Without a Net

Wayne Shorter may be the most respected man in jazz—a member of the legendary Miles Davis ‘60s quintet, a brilliant leader of legendary Blue Note dates during the same time (Speak No Evil, 1964), an innovator and composer whose involvement with the music has spanned hard bop, Brazilian fusion, and then the jazz-rock of Weather Report.

But he has also been the mystery man of jazz, in his tone and in his actions. He has always spoken in koans about his art, and when he left “mainstream” acoustic jazz to co-found Weather Report, he seemed to vanish from “serious” jazz for way too long. From 1971 until 2002—what amounts to an entire career for most musicians—Shorter’s music was brilliant but cold, a little plastic, too often trapped in a synthesized (‘80s-ish?) package that didn’t seem to allow for interaction or dialogue. To fans and fellow musicians alike, Shorter seemed like a bit of a void, a ghost, a genius in remission. 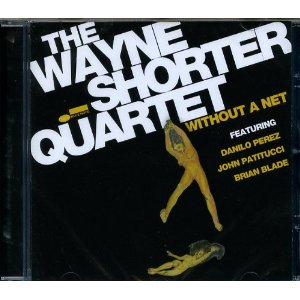 All that changed about a decade ago when Shorter put together his quartet with Danilo Perez (piano), John Patitucci (bass), and Brian Blade (drums). Seemingly overnight, Shorter was back with a vengeance. In concert and in a live recording, the band was everything that fans could have hoped for: all dialogue, a continual stew of musical conversation—an innovative group that was not merely playing great tunes and taking turns playing solos over the chord changes but actually creating innovative structures in the moment, setting up a daring new model for how an acoustic jazz group might work within tonality to still improvise with extraordinary freedom. Collections have come somewhat regularly since then, each one a revelation.

Without a Net collects performances by the quartet mostly from 2011’s European tour, and it represents yet another wondrous outing from the group, four dazzling players whipping up a magic froth from compositions that cross Shorter’s career from the ‘60s Davis group to music freshly composed for this band. As has been common in recordings by the quartet, Shorter has conceived of settings for film music and has again arranged one of his tunes for a woodwind ensemble in a manner that is gripping and highly integrated. This collection may be more of the same, then, but it is a brilliant continuation and elaboration on this strain.

There isn’t a single thesis statement here, and that keeps Without a Net from seeming like a landmark. But that simply isn’t where Shorter is as an artist at this point. His singular statement is in his band and the way it works, uniquely, across different kinds of material. That Wayne Shorter, days short of his 80th birthday, is leading what is one of the most thrilling bands in modern music, is more than notable. And because Without a Net also represents Shorter’s return to Blue Note records after 43 years, attention must be paid.

And your attention will be repaid.

Read the entire PopMatters review here: Wayne Shorter Quartet: Without a Net
Posted by Will Layman at 9:46 AM