Rudresh Mahanthappa has reached a level of balance and power in his music after a decade of prominent recording, composing, and leadership. In 2013, his art is so heavy that only a beast of band can set him up to express the great breadth of his personality. This current quartet seems to be that band.

Gamak features a quartet led by Mahanthappa’s acidic alto saxophone and fleshed out by electric guitar from David Fiucynski, Francois Moutin on acoustic bass, and drums courtesy of Dan Weiss. But the band proves to be both precise and highly versatile. Fiucynski, most notably, is able to bend strings and use his effects such that he can simulate the microtonal action necessary to give voice to the leader’s South Asian-tinged tunes—while a the same time having huge jazz chops and the tone, crunch, and firepower necessary to rip up the material here that bleeds over to fusion and even rock. 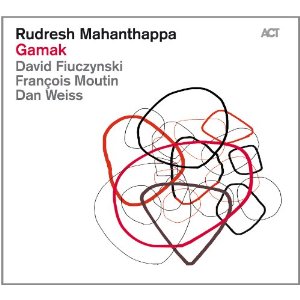 Rudresh Mahanthappa has made a fusion or rock album? No, not exactly, but this one is different. And wonderful.

The opener establishes things perfectly. “Waiting is Forbidden” starts with the saxophone playing an aggressively stabbed line in repetition, and then the guitar comes in with a syncopated funk figure, with the rhythm section syncopating things further so that the sound is a thick nest of groove rhythm. When the melody enters, it is played by alto and guitar in rough unison, but with Fiucynski sounding just a touch like a sitar. As all of this builds, Mahanthappa brings back the opening stabbing figure and the guitar continues a rock-edged melodic counterpoint.

In short, Whew!, you think, as all the music swirls and grooves and unspools eventually in improvisation that is backed up by a new stop-time groove. This is most certainly music with a fusion element, but it’s “fusion” moved far beyond any 1970s aesthetic. It uses power, electricity, precision, and groove—no doubt—but it has little of the slickness of, say, Return to Forever. And just as this thought crosses your mind, around 6:30 into the tune, Fiucynski wraps a big fuzz tone around a line that could have come from “Hymn for the Seventh Galaxy” while drummer Dan Weiss lays down thick rock drumming every bit as fusiony as Lenny White or Billy Cobham at their most 1970s-ish. And that’s not a bad thing: it’s great! Because the original melody comes back in over this groove and ties things up in a delicious, complex bow.

The other critical player in the versatility of this band is Weiss, who comes with a background in South Asian hand drumming and full command of an American jazz-rock kit. He is everywhere on Gamak, accenting intelligently, bashing as necessary, keeping things popping and syncopated, but never getting too cute.

Read the entire review here: Rudresh Mahanthappa: Gamak
Posted by Will Layman at 4:03 AM