In 1968, the Charles Lloyd Quartet, which had achieved rock-level fame and hippie acclaim, split and Charles Lloyd vanished from playing. Almost two decades went by, with Lloyd playing very little (weirdly, doing some touring and recording with the 1970s incarnation of the Beach Boys) until he slowly resurfaced as the same player in a wonderful new context.

Playing at first with pianist Michel Petrucciani and later with his own bands, he explored a variety of forms of balladry, impressionistic playing, and various forms of world music. But usually, it was with a great pianist: Bobo Stenson, then Brad Mehldau and Geri Allen, and more recently (since 2008) Jason Moran. Hagar’s Song is nothing more and nothing less than a set of duets with Moran. And in many respects it is the most intimate—and best—work of Lloyd’s career. 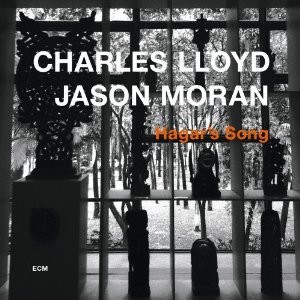 There has always been something idiosyncratic and difficult about Lloyd’s playing. He has a distinctive but sometimes thin tone, and his brilliance has been marred by lots of aimless playing, noodling you might say. Some of what Lloyd’s fans might call profound I tend to find tedious. But Hagar’s Song is the best of what Lloyd does: powerful introspection and intensity, a focused lyricism that sounds personal.

The program here contains all of what interests Lloyd: standards and free improvisation, rock tunes and textured originals. And because Moran is a versatile but daring player, Lloyd approaches these tunes with an orchestral originality. On Bob Dylan’s “I Shall Be Released”, Moran begins with a simple series of chords built around a single repeated high note, rolling in a hip bass line and eventually more complex harmonies. But Moran creates a context that is compelling even as it honors the simplicity (which is the beauty) of Dylan’s song. Lloyd barely does more than state the melody in different registers, but the vocal elements he brings to the song—cracking quavers in the upper register (where he continues to excel on tenor sax), breathy middle tones and a nasal resonance down low—make it feel complete without any fancy-pants rewiring of the melody.

Moran is brilliant setting the table on Chris Conner’s 1953 hit “All About Ronnie” as well. He caresses the keys to create harp effects, rainfall patters, shimmers—really anything that Lloyd needs to float his quivering melody upon. But when a more rhythmic approach is needed—say on the Earl Hines tune “Rosetta”—Moran is raggy and bouncing without resorting for formula. His left hand is strong but not thumping, and the sense of texture is always there, thanks in part to the crystalline recording quality provided (as ever) by Manfred Eicher’s ECM magic.

Happily, the sheer beauty of much of Hagar’s Song is relieved by elements of harmonic freedom. “Rosetta” may be from the ‘20s or ‘30s, but Moran clatters a line or two that could have been played only in the last couple of decades. “Pictogram” is a freely improvised conversation that sounds easy and light in temperament but thorny in the ideas it suggests. Moran plays a walking bass line with his left hand but, even there, the time suggested is not just swinging 4/4, and the two musicians allow more than one time signature to exist at once, each confident that they needn’t be lined up to be playing together.