Mostly Other People Do the Killing: Slippery Rock

Mostly jazz can be tedious. I mean, I love it, but way too many people will tell you, “Yeah, I love jazz! I put it on as I’m going to sleep!” Or people will say, “Jazz is great for studying.” Which means, mostly, that it’s background hum. It’s the soundtrack, mostly, for doing things that require some kind of adult sonic wallpaper.

Mostly, jazz is a hip kind of boredom, right?

But not when it’s played by Mostly Other People Do the Killing. This quartet—Moppa Elliot on bass and primary composer, Peter Evans on trumpet, drummer Kevin Shea, and the suddenly ubiquitous saxophonist Job Irabagon—plays jazz with a sense of adventure and daring, a perspective that refuses to honor too completely the past even as the band’s music usually has roots in what came before.

Which is to say: Mostly Other People Do the Killing is mostly wonderful, mostly compelling, mostly rich in ideas and energy and invention. 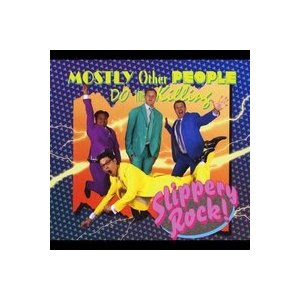 The band’s latest is called Slippery Rock! (another reference to a town in Pennsylvania, continuing the “joke” from MOPDtK’s This Is Our Moosic, in which every tune evoked the name of a town in that state). But, as is almost always true with this band, the music itself is no joke. In fact, MOPDtK’s music is no more gag-filled than that of, say, Charles Mingus. This band plays music rooted quite seriously in the jazz tradition, widely considered, from Armstrong’s contrapuntal approach to the manic flights of bebop to the tonal and harmonic abandon of Ornette Coleman or Rahsaan Roland Kirk. Here, as across their discography, the band also incorporates the dramatic expressionism of the contemporary “free” musicians from Chicago or Europe, using techniques of juxtaposition and contrast in composition and improvisation. As a result, the group’s sound and approach always has a sense of surprise and daring.

And in that surprise, sure, there is often a sense of madness or looseness that can seem like humor. Not jokes, exactly, but rather a joyous sense that these jazz musicians are not grim about their art. They are mostly gleeful and celebratory. Most assuredly.

That said, the packaging for MOPDtK records often uses humor. Slippery Rock!” has a cover that suggests a ridiculous ‘80s “new wave” band, with the band members wearing neon-colored suits and leaping across the tacky graphic design in period goofiness. The “liner notes” extend the gag, claiming that all the material here was inspired by Moppa Elliot’s immersion of “smooth jazz” records from the late ‘70s and early ‘80s. Though, the thing is, while this music sounds absolutely nothing like smooth jazz, the more you listen, the more you realize that Elliot may, in fact, have found motifs and elements from that body of work that helped to inform these otherwise knotty and compelling tunes.

Whether this is “funny” or “true” or not may be beside the point. Mostly, you need to listen to the music for the pleasure it gives and not so you have some critical understanding of its origins. And this music is so rich in action and content that it should give any fan of modern jazz a mostly full-on ear-to-ear grin.

Smooth or not (and it’s really not “smooth” at all), there is a ton of rockin’ groove in these tunes. The expressive “Jersey Shore” is rich in tumultuous backbeat, and the melody sounds more like a funky blues tune than any avant-garde jazz. But the way that MOPDtK puts this kind of music across is decidedly different: loose and expressive, with very little “taking turns” for solos and a great deal of collective blowing, with Irabagon and Evans flinging wild notes with abandon. On this tune, however, you can’t help but notice that the seeming madness is coordinated with intelligence and care—creating a spellbinding counterpoint that is capable of suddenly pulling back to a whisper, to a series of longer held tones, or to coordinated jabs or slurs. “Yo, Yeo, Yough” grooves too, with a bass line that is funky and fat, and “Dexter, Wayne and Mobley” evokes three tenor giants in its melody, but not in its hypnotic rhythm feel of bouncing funk bass and syncopated hi-hat clatter.

Read the complete PopMatters review here: Mostly Other People Do the Killing: Slippery Rock
Posted by Will Layman at 4:35 AM