In the early 1970s, if you were listening to instrumental music played by electric guitar, electric keyboards, and very busy drums, all executing tricky business and intricate patterns that would explode into fireworks of improvising, you were a fusion fan. “Fusion” was a kind of jazz-rock music that blossomed brilliantly for only a few years (Chick Corea’s Return to Forever, Larry Coryell’s Eleventh House, John McLaughlin’s Mahavishnu Orchetra, Tony Williams’ Lifetime, and the band Weather Report, for example) only to quickly flame out. This “plugged in” jazz seemed to come from Miles Davis’ experiments in the late ‘60s and early ‘70s, but it didn’t take long for it to become lame instrumental funk, so-called “smooth jazz”, indulgence in various forms. 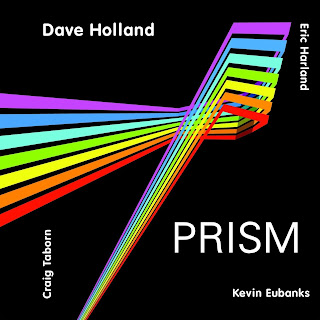 But, at its best, it was marvelous.

And acoustic jazz bassist Dave Holland—who played on some of those great Miles records that birthed the stuff but never really had a “fusion band”, per se—has now created the coolest fusion record I’ve heard in decades.

This new quartet is fronted by guitarist Kevin Eubanks, who played with Holland long ago (before his Tonight Show gig) and keyboard wizard Craig Taborn. The drummer, dazzling, is frequent collaborator Eric Harland. It’s a wonderfully balanced group, likely because the leader stays fully back of the pack, serving up great compositions but rarely crowding his players for sonic prominence. The result is a huge smear of sound and joy: exuberance, subtlety (yeah, even in fusion), beauty, fire.

Part of what makes Prism sound specifically like “fusion” is the preponderance of tunes that do not “swing” in the usual sense but are instead built on tricky riffs that interlock with a groove that is heavy on backbeat. The opener, Eubanks’ “The Watcher”, begins with a funky line from the left hand of Taborn’s Fender Rhodes electric piano, and then Eubanks doubles it before he climbs on top with a distorted but very simple melody. The sound is thick with fuzz and buzz from both Eubanks and Taborn. All of it would make for a satisfying track, but then a tricky and precise bridge section comes along for pleasing relief. Taborn’s solo is the standout here: mathematical and intriguing as it moves and reverses, surges forward and doubles-back on itself.

This lack of traditional swing flows across tunes in many tempos and styles. “The Color of Iris” is a ballad (also by Eubanks) featuring the guitarist’s mellower tone, but it is set over a bass groove that doubles Dave Holland’s huge low notes with the left hand of the acoustic piano, each note coming as a syncopated surprise, with Eric Harland controlling the flow with his cymbals. Holland’s lovely, minor-key “The Empty Chair” has Harland playing a funky triple-meter groove beneath a dirty pentatonic melody from Eubanks—essentially a soul tune built around a clear movement in the bass line. Taborn’s “The True Meaning of Determination” also doubles acoustic bass and acoustic piano with a series of rising/falling two-note phrases that interlock perfectly with a very unpredictable melody played by unison guitar and right-hand piano.

On all these tunes, the “degree of difficulty” is very high (a fusion trademark), but the execution rises even higher. “Evolution” is chock-a-block with stop-start movement that each player rides across with ease. The guitar and piano solos on “Determination” are pure virtuosity: Eubanks flies with power and fluency and then Taborn takes the opposite tactic, punching in a mad, stilted set of high-low jabs that resolve into a lava rush of rhythms and repetitions. “Spirals” is another Taborn tune built around a complex set of jigsaw pieces: piano parts, bass lines, guitar licks, drum fills. It is all played with nonchalant ease, and then Eubanks and Taborn spin astonishing improvised lines atop it all (And, how great is it to hear Eubanks, Mr. TV Sidekick, playing note-for-note and with daring authority alongside a critical darling like Taborn? They’re both brilliant).