Getting jaded is the natural province of getting old, of thinking you’ve heard and seen it all before, of believing that whatever is created tomorrow by a bunch of kids has little chance of improving on generations of greatness that came before.

But then something comes along that knocks you out and cheers your heart, that sounds utterly new even while it stands on the shoulders of things you love. And, yeah, it was made by young people you’ve never heard of. And the third time you listen to it, it’s better than the first time. And the fifth time it’s better still. 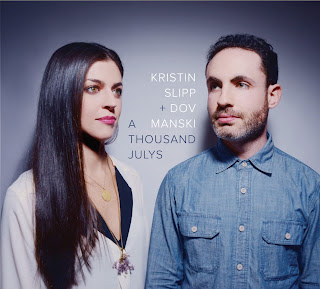 That’s what happened to me when I heard the brilliant, astonishing new collection of reimagined jazz standards by singer Kristin Slipp and pianist Dov Manski.

A Jaded Critic Gets What He Needs: A Thousand Julys

Dov Manski and Kristin Slipp grew up not far from each other in Maine, and they both wound up at the New England Conservatory at the same time. “Even before college, I had heard about Dov—he was a high school jazz prodigy,” she chuckles. “I knew who he was. When we got to college, a couple of us were from Maine and we felt comfortable together. We were friends even before we started playing together.”

Slipp and Manski started exploring a duo approach to playing jazz, finding that “it was really freeing—there was so much space and so many possibilities,” explains Slipp. It’s hard to imagine that a couple of music students were already working on a project that would create the most daring and intelligent set of jazz standards I have heard in at least 20 years.

But that is exactly the case. Manski and Slipp’s new recording, A Thousand Julys is brilliant and fresh, an utterly original expansion of the tradition that reaches beyond jazz by using the jazz repertoire to express individual emotions.

After listening to these 11 standard tunes a dozen times each, savoring both the emotional directness and the abstraction of the playing, both the clarity and the craft in the singing, I searched for contact information for these incredible young musicians and asked them to grant me a joint interview to tell me how they had made this minor masterpiece.

But A Thousand Julys stands far out from the pack as the most thrilling record I’ve heard in 2013.

The solution that Manski and Slipp have developed is not a formula, but it’s based around a couple of key ideas. Most clearly, these versions of old warhorses like “Smoke Gets in Your Eyes” and “You Go to My Head” are cliché-free. To my ear, Manski’s accompaniment steers clear of the standard harmonizations and morphs into different styles beyond what we normally think of as “jazz”. His “I Get Along Without You Very Well” has a “hurdy-gurdy” quality, for example, while his “You Go to My Head” combines a Herbie Hancock left-hand bassline with bi-tonal dissonance in the upper register of the right hand.

“On that tune,” Manski explains, “I wanted to outline the basic structure of the chords in the left hand, using sixths and tenths from stride piano, and then go against he harmonic grain with these bitonal intervals with the right hand. That was the idea, but I didn’t write out specific chords or voicings although this was clearly influenced by classical music. Charles Ives has been a big influence on me.”

The instrumental arrangements, then, don’t run away from tradition as much as they pursue Manski’s interests beyond more traditional jazz. “I wasn’t avoiding anything consciously,” says Manski, “but in this duo it is always okay to play the way I play. I never stray purposely from playing, say, a II-V-I harmony—but the guide is just that I’m only going to play what feels true to myself.”

This freedom, of course, comes from hard work. Both Manski and Slipp are true students of the music. “I do research to understand the song and how it has been played before,” explains Manski. “I study how singers have sung it, how orchestras have played it, the history of the song. From doing the research, I gain the confidence to let go and play naturally.”

Kristin agreed. “We have both absorbed very different versions of the song and have let them marinate. We use that as a guide. And then let it go completely. It’s not a big labored process.”

“Of course,” Manski adds “I listen to Kristin and how she sings each song.”

Singing Both Inside and Outside the Jazz Tradition

Slipp’s singing can be deceptively simple when you first hear it. She often starts her renditions of songs in an unadorned manner, not only avoiding unnecessary melodic embellishments but also singing with a tone and timbre that is notably plain or even “spoken”, with limited vibrato and a sensibility that comes from rock or folk singing.

Read the entire column here: Everything Old Is New Again: Reimagined Jazz Standards
Posted by Will Layman at 6:41 PM