At this point in the career of guitarist Bill Frisell, there’s not much point in continuing to talk about his music as “jazz”—or as “Americana” . . . or really as anything for that matter. Frisell has cornered the market on something wholly his own: an instrumental form that uses elements of different genres to create cinematic soundscapes that lope or slither, walk or skitter like a great character making his way across a movie screen. 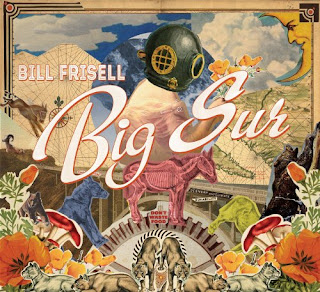 Big Sur is an outing for the leader’s “858 Quartet”, which is Frisell plus Jenny Scheinman on violin, Eyvind Kang on viola, and Hank Roberts’ cello, plus the drummer Rudy Royston. Frisell wrote this music (19 somewhat connected short tunes) on a commission while staying on a ranch at Big Sur, inspired by classic California coastline. The sound is mostly open and pleasing, and maybe sometimes just a little too nice—a little boring—in the way that beauty sometimes can be.

So, to be sure, this is mostly very “pretty” music, and that may be its glory and its problem. Although there is plenty of folky edge here—a kind of funky sweetness that suggests authenticity—most of the music on Big Sur is consonant, mid-tempo stuff. It’s soulful, like, dig “Highway 1”, with Jenny Sheinman’s violin bending notes and the strings generally playing syncopated patterns over a two-chord groove. Or how about the delightful but lightweight “We All Love Neil Young”, a duet between Frisell and Kang that is a charming minute and a half of skipping guitar and pure melody? Nice stuff.

But very nearly each of these little portraits leans on a certain kind of easy, loping vibe—a dreamy melodicism that comes with all the right kind of “authentic” American/folk affectations. It’s interesting and cool—but I admire this music more than I like it. The tunes feel a bit like museum exhibits. You might say that this music presents you with a bit of a guilt trip: Hey, man, you really should dig this, whether it’s terrific or not, just because it sounds so “real”.

Read the entire review here: Bill Frisell: Big Sur
Posted by Will Layman at 11:30 AM