Kenny Garrett: Pushing the World Away

Kenny Garrett is a workhorse jazz musician—a guy who has made plenty of recordings, who has a killer working band, and who gives his all in every show. Much of his work is brilliant. He has made long strings of records that have investigated different corners of the music with intelligence and searching discovery. 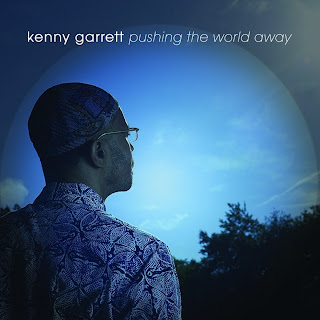 But in a long career, there have been stretches of relaxation also where he played too many easy blues licks or seemed to be recording songs that were designed simply to be “funky” pop songs that hardly tested his band or his talent. Those years with the aging Miles Davis taught him some bad habits as well as some brilliance.

Pushing the World Away is Good Garrett—and following up on a really wonderful 2012 record called Seeds from the Underground that was a flat-out cooker, this is a great sign.

I’d guess it’s not coincidence that the title of this disc contains “world” and “pushing”, as these songs cover lots of territory and move gracefully away from the pure swing feel that characterized so much of Garrett’s last disc. Garrett has long been playing pianist Benito Gonzalez, so the sweet Latin groove of “Chuco’s Mambo” is a natural, with percussionist Rudy Bird locking in with drummer Marcus Baylor to create a lovely feeling of dance and movement. And “J’ouvert” is a hopping and staccato calypso tune that is, naturally, an homage to Sonny Rollins in his “St. Thomas” mode but with a richer bed of percussion giving it float and ensemble interplay.

One of the most ambitious tunes here is the title track which builds on a rolling groove played by drummer Mark Whitfield, Jr. and piles a sinuous soprano saxophone melody atop a throaty chant that punctuates the arrangement. Garrett’s solo shifts into a sunny key over a vamp reminiscent of Coltrane’s “My Favorite Things”, but the pianist Vernell Brown muddies the harmonies so that things keep moving into stranger and more interesting territory. Garrett takes plenty of harmonic liberty, and the piece veers into the edge of the avant-garde. This tune is followed by “Homma San”, which uses a sprinkling of Latin percussion and a lovely wordless vocal as the etched shadow of Garrett’s melody on alto—a tune that is so lovely that nearly takes your breath away after the broiling intensity of “Pushing the World Away”.

This is a record that, indeed, pushes outward in many directions. It’s unusual, for example, to hear the leader performing on piano, but that’s him, fingers against keys, on his tribute to pianist and producer Donald Brown (who played with Garrett when both were in Art Blakey’s band), “Brother Brown”. And how lovely is it that Garrett has written out an accompaniment for violin, viola, and cello on this track? Very.

Much of the music here, however, has all the more typical Garrett virtues: swing, drive, and fire. “A Side Order of Hijiki” surges in a vintage post-bop vein, with Gonzalez playing like an up-to-date Tyner or Hancock around the edges of the melody and Baylor and his bass partner Corcoron Holt alternating between Latin syncopation and straight-ahead, four-on-the-floor uptempo walking. “Alpha Man” moves fast and slick as well, setting the melody as a tricky rhythmic counterpoint, but keeping the things moving on a very quick pulse played on the ride cymbal. “Rotation”, the closer, is a modern blues that would be a perfect tune on any jazz bandstand you can imagine, meat and potatoes and a heap of joy.

Read the entire review here: Kenny Garrett: Pushing the World Away
Posted by Will Layman at 5:31 PM