Last year, Robert Glasper won the “Best R&B Album” Grammy for Black Radio, a recording that blended his roots as a jazz pianist with his history as a producer and bandleader for various hip-hop artists. It was a plain vindication for a brilliant musician who was trying to create a fresh approach to black pop music, and the award made Black Radio 2 all but inevitable. 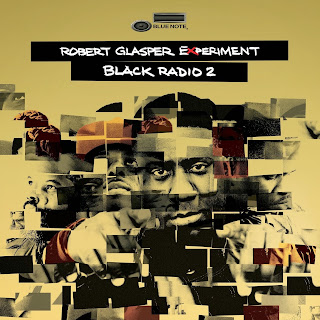 But this is where Glasper has been headed for a while anyway. The Experiment shared a disc with the pianist’s acoustic jazz trio in 2009 (Double Booked), and it has been his main horse since then. Though the bands had overlapping personnel, the concept of the Experiment is that it is a versatile hip-hop/R&B group—not three improvising jazz musicians playing art music but a single unit that carries out brilliant settings for pop songs.

So, in listening to Black Radio 2, the honest question is not whether the latest recording is a strong work from a jazz artist working with pop music but whether it’s a great pop record, a pop record that is fresh, creative, compelling, beautiful.

(In the jazz world, there might be some interesting debate about whether Glasper is “rescuing” the art from its popular decline, from its increased alienation from larger audiences. The answer, I believe, is NO. Jazz is a vital art music that doesn’t need rescuing. I don’t know if Black Radio 2 is “jazz” or not or whether that’s even a question worth debating—and this review hereby dodges this question.)

Black Radio relied on a group of well-known tunes that Glasper covered in new ways: one by Sade, Mongo Santamaria’s “Afro Blue”, two rock tunes by David Bowie and Nirvana, and a new song written with Me’Shell Ndegeocello. Other songs were perhaps more fresh, with hip-hop integrated into a 1970s soul aesthetic so that the best of classic R&B was melded with originality. Glasper’s jazz trio achievements were all there to be heard indirectly: specifically a way of arranging a rhythm section so that it is harmonically interesting and so that a busy piano groove locks into drum patterns that draw from hip-hop’s rhythmic “stutter” while still feeling utterly organic and soulful, never mechanical.

But, for this listener, the first Black Radio was marred by some sounds that soul music ought to have left behind: the plastic clang of certain synth sounds, the robotic novelty of the vocoder favored by Experiment member Casey Benjamin. The first record seemed to me, well, not as modern as it really wanted to be, a little stuck in a soul groove a couple decades old.

On repeated listenings, the strengths of Black Radio were clearer—plus, where else were you going to find such a brilliant blend of singers and rhythm section in contemporary music?

Black Radio 2 is better and certainly more original if less startling. That vocoder leads things off on the opening track, but the groove of new drummer Mark Colenburg is so perfect against Glasper’s blend of Fender Rhodes and acoustic piano that even I am relenting. Benjamin changes registers in an interesting way and comes off as simply part of the groove. With the band set in our feet as well as our souls, a chorus of the album’s voices performs an impressionistic “Mic Check”. And then, with a thrilling and jaunty piano groove, we are off on a journey: “I Stand Alone” puts Common before the mic with Patrick Stump handling a chorus that matches the piano groove. From the start, you’re in good hands again—feeling like there’s something fresh in the way hip-hop integrates with Glasper’s affection for older soul grooves.

The guest vocalists on 2 have one strong outing after another. Jill Scott locks into brilliant drum groove on “Calls”, a track that keeps things simple at first but then deepens with repetition and added layers of backing vocals, added shimmers of electric piano, and a striking bridge section that folds in a ringing phone sound and more abstract vocal lines. Scott’s vocal tone goes from dry to warm, and Glasper knows how to drop the drum groove out at the end to create a spare kind of suspense.

Read the entire review here: Robert Glasper Experiment: Black Radio 2
Posted by Will Layman at 10:46 AM