If you listen to early recordings by Thelonious Monk, Bill Evans, Herbie Hancock, or McCoy Tyner, you will hear some superb but relatively conventional jazz pianism. Playing as sidemen with older talents, they were more likely to stick to the script of the moment. But within less than a decade, each would become idiosyncratically themselves, developing an individual vocabulary they had nurtured over some time and moving its quirks to the center of their art. In essence, they became more utterly themselves, to the point where just a bar or two or their playing made it clear that only they could be at keys. 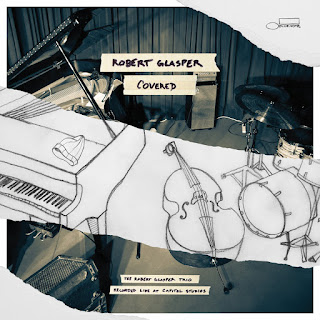 If you listen Robert Glasper’s first Blue Note disc as a leader, 2005’s Canvas, similarly you hear only the prototype, the beginnings of a wholly individual voice. It’s there, a new sound, but there is still plenty of playing that might be someone else or someone coming from similar influences.
On Covered, his latest recording (but, like the early ones, a strictly acoustic jazz trio record) there is no more mistaking Glasper for anyone but himself.

Today, Robert Glasper has about as distinctive a profile as you can have in jazz. He is a Grammy-winning leader of several bands, an in-demand producer for other artists, as well as a prolific session player. He has a distinctive sound that makes him immediately identifiable on any record. He’s big enough that, on the new record by bassist and producer Marcus Miller, he plays a Fender Rhodes electric piano solo on just one song — one song on which a regular band member plays the Rhodes accompaniment. That’s how special he is.

Although Glasper is undoubtedly a jazz player, his Grammy is not for jazz. And much of his production and sideman work has been in hip hop. And his new recording for Blue Notes sits right on the line; intriguingly so.

Back from years of silence is Glasper’s acoustic jazz trio (with Vicente Archer on bass and Damion Reid on drums) playing songs mostly from Glasper’s two R&B-ish Black Radio records: tunes by Glasper, Macy Gray, Radiohead, Musiq Soulchild, Joni Mitchell, Jhene Aiko, John Legend, and Bilal Oliver. Does that make Covered a jazz recording of “new standards”? Not in the conventional sense, as this trio has largely transformed the language of an acoustic jazz piano trio to adapt it to a new set of rhythms and habits that are deeply informed by hip hop and its musical cousins. Robert Glasper doesn’t “swing” these pop songs (which is an old idea he’d hardly bother with).

Instead, what emerges on Covered is the full extent to which Robert Glasper has matured as an individual stylist. Today, he sounds utterly Glasper on everything he plays, no matter the source material or context. I’m not saying he is as great or important as Monk or Tyner, of course, but he is now as distinctive.

Take his new “Stella by Starlight”. He begins unaccompanied in a tumbling rush of notes that track the well-known harmonies of a thousand other versions. But the attack is rhythmically distinctive, quickly breaking into Glasper’s signature sound: a fluttering arpeggiation of chords and melody that offsets his right and left hand by portion of a beat. It gives his acoustic piano a slightly processed sound, as if he had run it through a mental “chorus” pedal. Soon, Archer and Reid are in, but this is hardly a “jazz ballad” performance by the trio. Archer is thumping “the one” in his own stuttered heartbeat pattern, and Reid is playing quadruple-time brush hits against his snare, chittering and syncopating, almost as if he were performing impossibly fine and fast scratching on a turntable. Glasper’s improvised runs are set against “Stella” harmonies, but what seems to be a shortened and altered sequence of chords, such that when the melody returns it is just a sketch of itself.
There are other tunes where Glasper has chosen a melody and harmonic structure that is already fully to his liking. Joni Mitchell’s “Barangrill” barely requires a transformation, as the songwriter’s floating sense of harmony and spinning melody is right in Glasper’s bag. His style also seems beautifully suited to Radiohead on “Reckoner” (from In Rainbows) with a simple melody a pulsing chords in a deceptively not-that-simple pattern pass from drone into groove. Each song gives Glasper a chance to improvise in probing lines against a groove.

Read the whole review HERE AT POPMATTERS.
Posted by Will Layman at 7:04 AM