There’s been so much revolution among jazz piano trios in recent years, and accounts of the trend inevitably point to the Bad Plus: Ethan Iverson (piano), Reid Anderson (bass), and Dave King (drums). The band has a wide range and can “swing” in a traditional way when it so chooses, but the Bad Plus have mainly produced a series of highly structured compositions and strategies for instrumental drama and improvisation, and they have been catchy and cool enough to bring the band significant mainstream success. 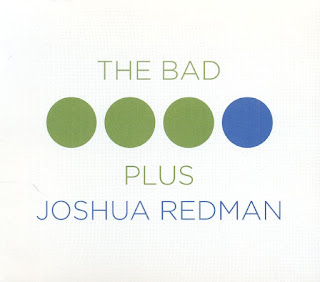 It’s only with the release of The Bad Plus Joshua Redman, the band’s first recording with another major player, that I realized that the Bad Plus might be understood as the Dave Brubeck Quartet of our era.

Dave Brubeck, forever known to the public for “Take Five”, was the most popular and prominent jazz musician of his heyday (the late ‘50s and early ‘60s), but his success was improbable and idiosyncratic. He famously wrote and played tunes in odd meters, his piano playing was “heavy” and often bombastic (though he played gently too, and beautifully), his music could be jokey or gimmicky at times and yet he wrote jazz standards too, he courted a fervent following among younger fans who got hipped to jazz by his band, and his band featured a swinging saxophone player whose style very much offset his own and whose fame and jazz legitimacy nearly outshone him.

That’s a pretty good description of the Bad Plus, until you get to that last part about a jazz saxophonist. And now the trio has been supplemented on record and on its recent tour by tenor saxophonist Joshua Redman, a very swinging modern master whose jazz fame precedes and might exceed that of his new collaborators. Redman, the son of Dewey Redman and a Harvard graduate, won the 1991 Thelonious Monk International Jazz Saxophone Competition, and he quickly developed a high profile career at a time when such careers were about to fade away with the fortunes of the record industry. Is Redman a natural match for the Bad Plus? Probably not. And that is the wonder and joy of it.

The Bad Plus Joshua Redman is every bit a Bad Plus record. Both the songs and the song titles are clever and idiosyncratic in the manner of previous Bad Plus work. “County Seat” has a jabbering and funky theme for tenor and piano that shuffles through quick changes in time signature such that, well, forget about tapping your toe. And yet it’s a groovy feeling tune, irresistible really, until it moves into a wild section that pits Redman against King in pure free-blowing style and then, zip-zap-zop, it’s back to the groove — and done in barely three minutes. Fun, odd, playful, and full of flavors.

Read the entire review HERE AT POPMATTERS.
Posted by Will Layman at 4:44 AM