JOHN McLAUGHLIN: TO THE ONE — Fusion the Way We Used to Like It

At its peak, jazz-rock fusion was better than just fast-and-loud, but fast and loud was part of it.  Hey, I was a teenager during those days, and if I was going to spend a good chunk of my listening time on jazz rather than Led Zeppelin, then I was going to need some crunch and danger.

Guitarist John McLaughlin—he of the Mahavishnu Orchestra—usually satisfied.  The Inner-Mounting Flame and Birds of Fire still sound good to me today.  But, other than his duet album with Carlos Santana and his work with Shakti (his acoustic band, playing a different kind of Indian/fusion), the rest of McLaughlin's work has been hard to love. 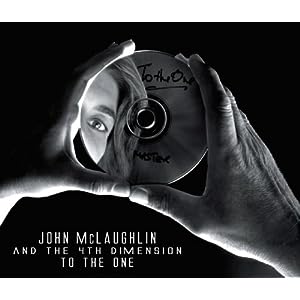 2010, however, brings a return to the driving fusion of the early Mahavishnu days.  To the One, featuring a new-ish band called The Fourth Dimension, is the old searing McLaughlin, back with speed and excitement but still some intelligence.  My review is up on PopMatters today.

Other McLaughlin's wonderful guitar, the recording features outstanding keyboard work by Gary Husband.  Using acoustic piano, Rhodes, and synth sounds, he gets everything right.  That Husband is also one of two over-the-top drummers on the date just dazzles all the more.  Not every jazz fan is going to be with me one this—this is a real '70s fusion date, with some of the indulgence associated therewith—but it is the real thing, not some watered-down smooth jazz syrup.  McLaughlin sees the album as a contemporary offshoot of Coltrane's A Love Supreme, and you can hear it in the way the players surge and sing in their playing.  It's exciting, but the playing comes from a well of desire.

I'm not a fan of McLaughlin's use, on To The One, of guitar synthesizer.  This gizmo makes his sound generic and cold.  That he uses the devise on a couple of ballads just makes it worse, as these are tunes where the flesh-on-string sound could have been that much better.

But mostly I like To The One.  I like it better than anything Johnny M has done in decades.  It comes darn close to making me feel 16 again—130 pounds, full head of hair, living in New Jersey and still with a small crush on Barbara Feldon from Get Smart.  The power of music, huh?
Posted by Will Layman at 3:39 AM