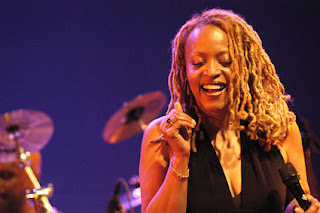 For me, Cassandra Wilson raised the bar for jazz singers in the last two decades.  High.  On the one hand she started out singing jazz from a rare perspective—from the fringe.  Her origins in jazz are with Henry Threadgill and Steve Coleman.  On the other hand, her recordings since she joined Blue Note (with 1993's Blue Light Till Dawn) have been singular successes at bringing rock-era pop and blues into a jazz singer's repertoire. 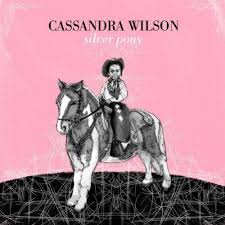 But her latest, 2010's Silver Pony, is a disappointment.  Her voice is wonderful as usual: deep and elastic and insinuating.  But she is plainly coasting.  The first three tracks are live versions of songs from her last album.  And as much as I like her "Lover Come Back to Me" and her "St. James Infirmary," hearing them again live so quickly is not high on my list of Cassandra Wilson hopes and dreams.

Worse, there are a few tunes here that just seem like filler, particularly a couple of "songs" that are merely excepts of jams from a live show, one presented on its own and the other given lyrics and worked into something new.   "A Night in Seville" and the title track are going nowhere fast. It's not all live, too, which adds to my sense that this is an oddly stitched-together program.  I dig some of the new stuff—a great "Forty Days and Forty Nights", which is a fresh take on Muddy Waters, and wonderfully spare "If It's Magic," from Stevie's brilliant Songs in the Key of Life.  I also like the new band, particularly young pianist Jonathan Batiste.

If you love Cassandra Wilson, you'll find other good stuff here as well—a duet with John Legend, a ripping slide guitar solo, a neat reharmonization of "Blackbird."  But Silver Pony is a grab-bag of stuff, not a great new album.  I expect something more impressive next time from my favorite jazz singer.
Posted by Will Layman at 4:05 AM