Farmers by Nature: Out of This Worlds Distortions 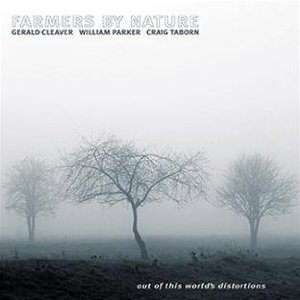 There is extreme playfulness in the bloodline of the trio Farmers by Nature: Craig Taborn on piano, William Parker on bass and Gerald Cleaver's drums. “Sir Snacktray Speaks” puts together a jabbing little jig from Taborn’s piano with an aching set of held bowed tones on Parker’s bass to generate a smiling theme. Then Cleaver takes over for a cluttered drum lead that scampers over a Parker pizzicato line. Then Taborn reenters, with a moody set of locked-hand chords, which sets up Parker to return to his bow for some down-home fiddle figures.

If it’s a lovely ballad you hanker for, then the opener, “For Fred Anderson” (a reference to the recently passed Chicago free tenor player), is a haunting, lovely theme. Taborn rings his keys with the sustain pedal down, getting a series of beautiful overtone resonances—a bed of stunning sound over which Parker plays very quiet bowed tones. The texture of this performance is spare and transparent, but Cleaver thickens it with subtle cymbal and percussion work.

The title track of Out of This World’s Distortions may be its highlight. Parker begins with a stately plucked melodic over pulsing cymbals. Taborn eventually enters with a set of sculpted rising patterns that are not the theme as much as a framing accompaniment. Over time, this balanced conversation draws you in, seeming to ask a million questions without providing obvious answers. You might listen to it 10 times, concentrating on different elements each time.

Read my full review of the recording HERE.

Each of these performances makes the case that “free jazz” is not a forbidding mess but rather an open plain of possibilities. Farmers by Nature is a band that takes seriously its mission to communicate to listeners, even though there is not a compromise in sight. The music is not appealing because it is familiar but because it sounds grounded, rooted, in basic patterns and in a connection to emotion.

Craig Taborn, William Parker and Gerald Cleaver move as one on this record. And if you give the music half a chance, you move with them.
Posted by Will Layman at 3:31 AM