Ornette Coleman: Something Else!

Every revolution has to start somewhere, and often the beginnings are not particularly unsettling.  That was certainly the case with Ornette Coleman and his "free jazz" style.  Or was it?  At the time, people reacted to Ornette as if he had taken a poop in his horn and set it on fire. 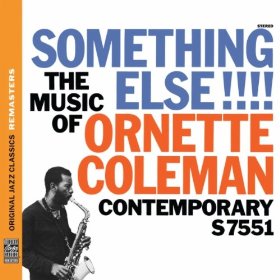 Looking back at his first album Something Else! (read my full PopMatters review HERE), it seems like Ornette was just a slightly ornery bebopper with a loose sense of intonation.  It sounds pretty mainstream.  The themes are spirited and tonal, and the whole enterprise certainly swings like mad.  In the original liner notes, Ornette states: “I think that one day music will be a lot freer”. Even the artist did not think it was there yet.

Pianist Walter Norris and bassist Don Payne are simply playing bebop—just listen to their solos on “Angel Voice” and you will hear utterly conventional bop playing of the late ‘50s. And Billy Higgins’ drumming, while fluid and simpatico with Coleman in every moment, swings in conventional time. It is notably less “out” than the work of, say, Max Roach or Art Blakey from the same era.  Don Cherry on "pocket trumpet" is also playing bebop, but he is closer to Coleman in concept. His long solo on “Alpha” is a clear balance. On the one hand, Cherry crackles with licks that run across the harmonies, just as if he were Kenny Dorham. On the other hand, there is a raggedness to his tone in places, and he has developing a way of abstracting the harmonies without really playing “wrong” notes.

The leader, however, is already free on his solos. Not only does Coleman use an off-putting and highly vocalized tone, but he tends to play flat in ways that makes all his notes sounds like blues tones. Then, when actually selecting notes and building phrases, he does not necessarily follow the chord patterns that Norris and Payne are playing. On “The Blessing”, which is a wonderful and attractive theme over the “I’ve Got Rhythm” chord changes, Coleman’s line is significantly in conflict with the first pattern. On “Alpha”, Coleman sounds a good bit like Eric Dolphy in the way he follows his own sense of vocal patterns down interesting melodic allies.

Listening to the whole package in 2011, it's clear that there was, in fact, a revolutionary player and thinker leading this enterprise.  He just didn't have his concept full actualized yet, and his bandmates weren't quite on board.  A mere year or so later, he would have Charlie Haden on bass and eventually Ed Blackwell on drums, dropping the piano.  The revolution—though lovely and lyrical in many places—would arrive.

But it started here.
Posted by Will Layman at 4:33 AM