I really really like guitarist John Scofield. His start with Mingus and Chet Baker, his stint with post-comeback Miles, his fusiony bands in the early 1980s and then his killer string of discs on Blue Note and Verve: great stuff. 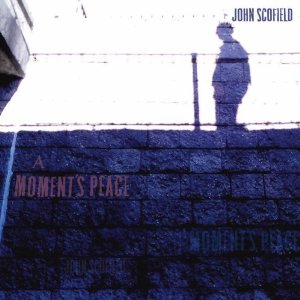 But when he became a kind of "jam band star" with the superfine disc A Go Go (with the trio Medeski, Martin, and Wood), things maybe soured a little. A bunch of his records after that seemed a little puffed up with affectation—not all of them, nope, but certainly Uberjam and its live follow-up, which seemed like lowest common denominator stuff for a guy who wasn't into coasting.

If Sco's career in the last dozen years has been up and down, then his new disc, A Moment's Peace, is up-up-up. Featuring a brilliant band (Larry Golding, Brian Blade and Scott Colley) and a wonderful mix of standards, pop songs and originals, this is a quietly daring recording.

The band’s treatment of standards is similarly quirky and strong throughout. “You Don’t Know What Love Is” is given a fresh take—with Goldings playing a pulsing kind-of-reggae offbeat figure throughout. Blade’s rhythm approach, however, works somewhat against that groove, with jazz accents and melodic rolls acting like a gentle version of what Elvin Jones might have played on this kind of tune. Goldings solos memorably over the “A” sections, setting up Sco for a fluid and sharp statement on the bridge.

Both “Gee, Baby, Ain’t I Good to You” and “I Want to Talk About You” are played in a more conventional jazz style, but both are superb. “Gee Baby” catches Scofield in note-bending mood, like a weirder, subtler B.B. King. Every note is clear and tangy. The Eckstine tune moves Goldings over to piano, where he is just fine. Colley comes through in the mix more completely, letting the partnership with Blade shine at mid-tempo. As Scofield tackles the tougher harmonic path on “Talk About You”, the rest of the band sets up beautiful polyrhythms behind him. Now, this is no jam band in the popular sense, but the group dynamics and sense of play here are outstanding. Everyone in the band is cooking, but there isn’t a cliché in sight.

This is a band that is exceptional at setting a mood. Blade’s mallet work combines with Golding's piano to prepare Sco for a lovely reading of “Throw It Away”, a tune by Abbey Lincoln. Carla Bley’s “Lawns” gets a treatment that is quietly warm, with just a hint of strut in its step. And several Scofield originals are typically hard to get out of your head.

Maybe one of finest jazz records of the year, A Moment's Peace makes John Scofield seem a little less jammy and whole lot relevant and cool.
Posted by Will Layman at 11:20 AM