In sheer talent and bravado, there’s not a more remarkable jazz singer out there than Kurt Elling. His instrument, a baritone to tenor beast that is pliant, rich, and utterly athletic, has no peer in jazz. And he has been making a series of records of great imagination—collaborations with his long-time pianist Lawrence Hobgood that take on the jazz repertoire in interesting ways.

The latest is 1619 Broadway, a reference to the address of the famous “Brill Building” in Manhattan where a couple generations of great songwriters created a body of work that spanned the late period of “The Great American Songbook” and the first wave (or two) of rock ‘n’ roll. This new album, then, takes in an idiosyncratic swath of American songs, from Ellington (“Tutti for Cootie”) to doo-wop (“I Only Have Eyes For You”) to Bacharach/David (“A House Is Not a Home”) to ‘70s singer-songwriters (Carole King and Paul Simon). 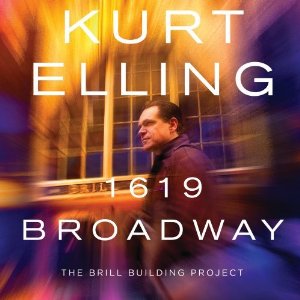 And, because he is a very interesting interpreter, Elling gets at these tunes in singular ways. The opener, “On Broadway”, works from a delectable seven-note lick that underpins the whole tune in a hip and slightly menacing way. The lick (for bassist Clark Sommers and guitarist John McLean) weaves through a strange time signature, with a couple extra beats breaking up the groove every few bars, and it rides atop electric piano comping from Hobgood—not his usual axe. It’s a good reading of the tune, no doubt, even framed by a bunch of street sounds and voices (people telling Elling they don’t want to hire his ‘ooo-bop-a-doo’ vocal talent, ironically).

But some of the gimmicky-ness of this track drags down 1619 Broadway in other places. The Brill Building was home to plenty of classic songwriting, but Elling doesn’t avoid some of the novelty content that came out of Brill.

On the other hand, there are a four of five performances here that are as wonderful as anything Elling has ever done. And that means that they are timeless vocal jazz that busts down barriers. The funk feel that McLean puts beneath “You Send Me” is a great butt-shaking counterpoint to Elling’s simple take on the vocal line. This is a classic oil-vinegar kind of idea, with the tight drumming (Kendrick Scott) and minimal piano work just setting up the vocal for success. The band grooves really hard, and then Elling doesn’t have to overwork it, just twisting his voice a bit here and there to draw the juice out of the simple melody. The layers of background vocals (Elling, overdubbing nicely) are beautiful, and everything fits.

There are two other tracks here that are so good that I can’t stop listening to them in endless repetition. First, Elling has recorded here the very best version of “A House Is Not a Home” I’ve ever heard. This track contains no tricks or transformations. Rather, this is a brilliant singer taking on a great song with the support of a sympathetic band. The quartet (McLean with the trio) is all pastel colors and subtle support, and Elling brings his most even and lovely sound to the lyrics. Elling can do just about anything, so it is his restraint here that is admirable. The arrangement is very specific in places, with certain key words (“ends—in—teaaaaaaars”) being placed carefully along with the band, but in other places everything is open and Elling moves the notes to suit a whispered mood. Hobgood also plays a crystalline solo that is just right.


The highlight of the collection, however, is a duo for just Elling and Hobgood on Paul Simon’s “An American Tune”. This is one of those classic songs that exists somewhat under the radar and in the shadow of so many other great Simon songs. But here Elling rescues the song, for me at least, making me wonder why it hasn’t been covered by a million other artists in the last 30 years. Hobgood doesn’t significantly rework the song’s harmonies. He doesn’t have to. Rather, he reads the gospel chords with sensitivity and patience. Elling states the first line of the melody a cappella (“Many is the time I’ve been mistaken and many times confused”) before the piano joins, quietly. As Elling sings the refrain, “But I’m alright, I’m alright”, his vulnerability is said with no extra strain or effort. It is the perfect sound for this sentiment. When they get to the song’s bridge, Elling finally reaches up for some power, and it shatters you: “And I dreamed I was flying / And from high above I could see / The Statue of Liberty sailing out to sea.” By the end of this performance, I felt that I had never heard the song before and, truly, I hadn’t. (Plus, uh, I was crying.) Elling and Hobgood now own “An American Tune” as surely as Sinatra owned “Come Fly with Me”.

Read my entire PopMatters review here: Kurt Elling: 1619 Broadway, The Brill Building Project
Posted by Will Layman at 3:10 AM