If it ain't broke, don't fix it. A-and, add Norah Jones to the mix as well.

In 2008, Blue Note released a live recording from Wynton Marsalis featuring the timeless Willie Nelson as guest singer and soloist. Two Men with the Blues was one of the highlights of that year because Nelson made the sometimes antiseptic Marsalis (with a crack quintet) looser and more fun and Marsalis pushed the sometimes-rather-lazy Nelson to be sharper. It was a classic win-win. 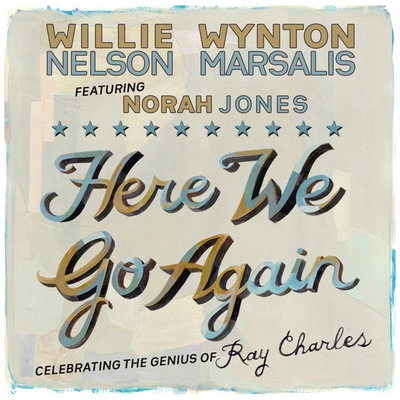 The boys are back together again with Here We Go Again (read my full PopMatters review here). And it's another strong outing. How could it not be, with the material this time being the stellar repertoire associated with Ray Charles and with the single-malt voice of Norah Jones featured as well? Again, Marsalis's arrangements for quintet are clever and swinging, astutely recasting familiar material in smart ways. And Nelson proves again that his laconic singing style is as much a child of Louis Armstrong as any proper "jazz" singer. Finally, this is the first we've gotten to hear Jones singing with a true jazz group behind (rather than merely her fine but limited pop band), and Marsalis spurs her singing to a higher realm. (Seriously, why hasn't Norah Jones made a real jazz album?)

What's missing from Here We Go Again is pretty well implied by the title—it's a bit routine. You know these songs a little too well, and everyone involved is doing what they do perfectly on cue. This disc doesn't seem to have a capacity to surprise us.

That said, it's lovely in nearly every way—a great example of how jazz can still be a powerful popular medium. It's a jazz album that I think just about anyone should delight in.
Posted by Will Layman at 5:43 AM