The World Saxophone Quartet: Yes We Can

Old things can be new again.

And in jazz, too few bands stick around for thirty years. Certainly there are too few edgy bands that stick around for decades without losing their bracing newness. But the World Saxophone Quartet is just that. Begun in 1976, the WSQ has always functioned on the avant-garde wing of jazz but with tremendous success and showmanship. For all its honking and squealing, the WSQ has also covered Jimi Hendrix and Duke Ellington, making it for a long time on Elektra/Nonesuch. The band, which normally plays as just four saxophones with no rhythm section, long ago achieved a balance between the daring and the structured.

Yes We Can (read my PopMatters full review HERE) finds the band live in concert, playing alone and without frills. Things are not just as they were in '76, however. Julius Hemphill passed a while ago, and he is replaced here by the band's newest permanent member, the thrilling James Carter. Replacing Oliver Lake for a few concerts was Kidd Jordan, the New Orleans veteran who originally brought the band together. Founding members David Murray and Hamiet Bluiett are on hand and holding down the traditional sound. 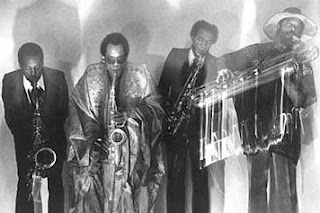 Things start, as they always did when I saw the band live in the past, with Bluiett's "Hattie Wall," grounding things in a stomping groove rather than just abstraction. But this program then moves into fresh territory: something wild from Jordan, a lovely ballad from Murray that has the WSQ sounding like a lovely, harmonized chorus, "The Guessing Game" from Bluiett that takes advantage of the band's facility with pastel clarinet sounds.

This is a solid WSQ record in the classic mode. No African drummers or R 'n' B covers, which were both cool things for the band but not its bread and butter. Yes We Can, which of course refers to the US election of Barack Obama, find the band content and solid but also new, looking to the past but happily grounded in the present. It's a good place to discover the band if you don't know it, and it's a good place to come back to if you're an old fan who hasn't heard these boys in a while.
Posted by Will Layman at 4:06 AM