ABBEY LINCOLN, ONE FOR THE AGES

The great jazz singer Abbey Lincoln died yesterday at the age of 80. 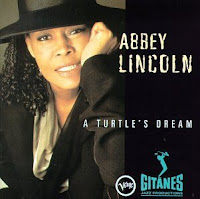 It's hard to write analytically about jazz singing, I think.  It is very personal.  Some singers have technique and style but also have a sound that just turns me off.  Abbey Lincoln usually had the opposite effect on me: her delivery was declamatory and personal, and she sang the blues all the time no matter what style of song she was delivering.  I didn't like all her work—sometimes I felt that her tunes were lectures directed at me rather than stories that should move me—but I mostly loved her.

Here she is on the great Night Music show, singing the Charlie Haden tune, "First Song":

If she's new to you, here are the basics.  Lincoln (a stage name, she was born Anna Marie Wooldridge in Michigan) started singing and acting in the mid-50s, singing under the useful influence of Billie Holiday.  But her direction as a jazz musician was largely formed when she collaborated with the great bop drummer on 1960's We Insist! Max Roach's Freedom Now Suite.  The two were married from 1962 through 1970.   Lincoln was a wholly individual artist whose sure delivery could be insistent and political but also introspective.  Her recent work has highlighted original songs that are worth your listening time.

Lincoln had a great influence on younger jazz singers, mostly notably Cassandra Wilson.  Wilson's rich sound and unusual phrasing is inconceivable without  Lincoln's model.  Neither artist has been happy to base a career mainly around half-century-old standards.   Here is a recording of Wilson singing one of Lincoln's songs:


For me, Lincoln embodies a certain kind of affectless jazz singing.  It's not that it lacks style or individuality—far from it.  But Abbey sang relatively fewer notes; she did not embellish her singing with useless filigree or show-biz grimacing.  She incorporated the feeling into her tone and into the rhythmic placement of her notes in relation to the time of her band.  That defines jazz singing more than anything else, and all the great ones did it.  Lincoln did it brilliantly, and she did it her own particular way.