Most folks who know the powerful singer-songwriter Tracy Bonham know her from her 1996 hit song, "Mother, Mother."  I missed that one in the moment.  But in 2001, when Ken Burns' JAZZ documentary was broadcast, I became fascinated by the musician Matt Glaser, a violinist who spoke about how Louis Armstrong was comparable to Einstein in the way that he made time relative in his placement of improvised notes against the beat.  (You can read my 2005 interview with Glaser HERE.)

Soon enough, I'd discovered Glaser's odd/breathtaking jazz/bluegrass/klezmer/folk collective Wayfaring Strangers (Shifting Sands of Time, 2001, and This Train, 2003), including the singing and fiddling of Tracy Bonham.

Bonham was not a jazz singer, nor was she a bluegrass or klezmer or folk artist, exactly.  But that's the kind of band Wayfaring Strangers is.  Soon enough, I found myself reviewing her third album, Blink the Brightest, a collection that I still find irresistible today.  "DUMBO Sun" and "Whether You Fall" are hit records in my universe any day—catchy, smart, fun, melodic, a bit sassy. 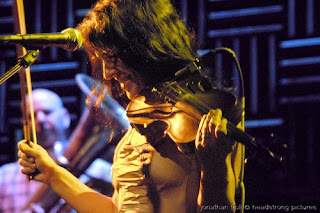 Her new record is called Masts of Manhatta (reviewed today at www.PopMatters.com), and it is nearly as wonderful.  The sound is a bit more acoustic, a bit more country.  Bonham and her husband now live partly in Brooklyn and partly in Woodstock, NY, which is supposed to account for the blend of sounds on the disc.  But this is not just some mid-career shift toward country sounds.  In fact, the disc contains all the great pop arrangements from Blink, with idiosyncratic song structures and off-beat stories in the lyrics.  The sound is just a bit more rootsy, and it wonderfully features guitarist Smoky Hormel and his band.