I've recently been involved in some interesting debates about the importance and value to jazz of innovation versus tradition.  This is one of those topics that has been front and center in jazz for a long time: the battles between boppers and "moldy figs", the suspicion during the 1960s of "free" music, and the various stand-offs between neo-traditionalists and less conventional players (and between those fusing jazz with other forms) in the 1980s.

I'd like to think that these debates have become mostly irrelevant today.  So many musicians cross these boundaries every day.  And they do this in surprising ways.  For example, the singers Rebecca Martin and Jen Chapin.
Martin's new album is When I Was Long Ago, and it is a collection of standards.  Now, that is a prescription for jazz traditionalism, right?  But this disc—for all its standards such as "Lush Life" and "Willow Weep for Me"—is risky and daring.
To start with, Martin is backed only by two instrumentalists: bassist Larry Grenadier (also her husband) and saxophonist Bill McHenry.  Inevitably these are spare arrangements that leave Martin's vocal sound vulnerable and exposed.  This makes it a kind of vocal tightrope walking—which can be exhilarating to listen to.
Check out "But Not For Me" as just one example.  Martin sings the rarely heard verse accompanied just by Grenadier—no small feat as it meanders melodically in an interesting way.  Then when the familiar melody appears, McHenry enters with a single held note that acts like a tart, slightly dissonant, complement to the charming melody.  While Martin doesn't do anything deeply weird with the tune—she sings close to the melody—her tone is not an Ella-esque smooth jazz glide but a personality-rich voice that has the bend and sway of jazz along with rock traces of Rod Stewart or Joplin.  And Bill McHenry sounds fabulous and free on his solo: both exploratory and at the same time briefly quoting "Tangerine."  This isn't avant-garde music, yet it feels unfettered in the best ways.
It's hard to explain how Martin sounds more contemporary than the standard modern Billie Holiday imitator (and, yeah, I'm talking about you, M Peyroux), but Martin owns this material more like she wrote the songs than as if she just loved her old records.  When she sings "Lush Life," she is telling you the story for the first time rather than SINGING it like she was Coltrane.
Rebecca Martin is recording for Sunnyside, and she is typically backed by great jazz players like Kurt Rosenwinkel, but maybe it's not quite right to call her a "jazz" singer.  Her style assembles jazz and folk, maybe you want to call her "indie-pop" or maybe you'd rather skip the labels altogether.  She has worked with songwriter Jesse Harris—the guy who penned the Norah Jones smash hit—so maybe that makes her a Norah-ish pop/jazzer?  But the sound of her bands—dreamy and impressionistic and hauntily swinging—makes her seem more like a purveyor of modern art songs like Jon Mitchell.  Now, by recording a full program of standards, Martin seems to be working with the jazz label even as she nudges it aside.

While I've been criticized for suggesting that jazz needs to find ways to make itself relevant to today's world, I still feel this is true.  The point is not for jazz to sell more discs or pander to popular styles.  Audiences may dig pandering in the short term, but it will kill an art form.  But if jazz musicians want their art to live actively in the public ear in 2010, they have to make the art of jazz mean something in 2010 beyond nostalgia or abstraction.  I think that Rebecca Martin is doing that by investing these standards with contemporary feeling and by reimagining them without their decades of old associations.
Remarkably, singer Jen Chapin (yup, Harry's daughter, but more a soul or jazz singer than a folkie) used this precise instrumentation of voice/acoustic bass/saxophonist for her 2009 take on the Stevie Wonder songbook, Revisions.  I've written about Jen at length before, and you can read my profile of her and family in an old edition of my PopMatters column, JAZZ TODAY.  I still feel the same way about Jen—that she deserves way more acclaim.  Because she hasn't fashioned herself as a "jazz singer" but also hasn’t hit it big she lives in a middle area where the fame/publicity is limited but the artistic rewards are huge. 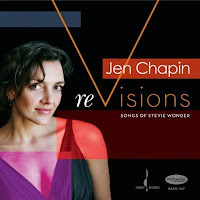 Backed another husband who happens to be a first-call jazz bassist (Stephan Crump, recently of Vijay Iyer's trio and his own Rosetta Trio) and a terrific saxophonist Chris Cheek, Chapin provides Wonder's songs with a new lens that is supremely elastic and interesting.  Though her voice carries the timbre of a modern soul singer, her time is drenched in a feeling for jazz.  And with Crump swinging like mad even when he is playing funky patterns, this disc becomes another refreshing example of how jazz can be refreshed brilliantly by touching something that feels more a part of today's world.
In a sense, Revisions is the flip side of the Martin recording in that it uses a repertoire that is not associated with jazz but then applies jazz techniques to get inside the songs.  "Renewable" is a Wonder song that I don't really know in its original form, but here Chapin's vocal is in constant dialogue with Cheek's tenor saxophone while Crump plays a probing bass line that would only be found on a jazz record.  Chapin doesn't "improvise" in the usual jazz sense, but she works with the song in a context that requires her to listen to instrumentalists who are improvising.  It's a bracing performance in every respect.
When Chapin approaches Wonder in a more direct and funky way, you won't be able to resist.  Her "Jesus Children of America" is given a rocking bottom by Crump's slap/pluck technique, and Cheek plays the edges as her equal: soulful.  "Village Ghetto Land" is sung delicately and playfully, with a prancing bass part and Cheek sounding almost fussy on soprano—an ingenious way of making the lyrics about terrible conditions for poor folks in the city seem particularly poignant.
Any chance you get to check out Rebecca Martin or Jen Chapin: take it.  Today's pop music on the radio is fun, but Martin and Chapin are finding ways to combine jazz technique with the deeper side of our grand American tradition of popular art.  If you'd have told me that 2009-2010 would find two brilliant singers use the voice/acoustic bass/saxophone format to make stunning music, I'd have thought you were nuts.
But it's true.  Thanks, Rebecca and Jen.  We're not nuts—we're lucky.
Posted by Will Layman at 7:54 AM