Like a million of other people who grew up in the New York area, I had a healthy wariness of country music and related forms when I was younger—the twang was alien to me, I suppose, and I was too immature to really listen.  But my love of jazz helped me to hear the technical brilliance of bluegrass, eventually, and I've been expanding my range ever since.

Of course, you didn't have to be a bluegrass fan to enjoy Nickel Creek, the bluegrass/pop band featuring Sean and Sara Watkins (guitar, fiddle) and Chris Thile (mandolin), which made charming and melodic "newgrass" that had more than a tinge of pop delight about it.  But Nickel Creek is taking a break while all three members pursue other projects.  And Chris Thile's new band, Punch Brothers, brings me right back to my jazz roots, kind of. 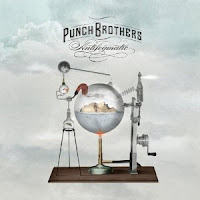 Punch Brothers have a new album out, Antifogmatic, and you can read my full PopMatters.com review to get the complete lowdown.  The first commenter on the review complained that people should not describe this band as being "bluegrass" despite their classic bluegrass instrumentation (guitar, banjo, fiddle, mandolin, acoustic bass, stacked vocals), and this is fair enough.  These guys write and play exceedingly complex music that sometimes sounds old-timey but just as often uses elements of classical music, jazz, rock, or folk music.    Most often it mixes and matches styles such that it is entirely sui generis, a bit hard to follow, less than purely appealing.

But that is fine by me.  Antifogmatic makes you work hard as a listener, to be sure, but it rewards the listening with surprise and invention.  It suggests (as my commenter over on PM, a fellow Bethesda-ite apparently, should appreciate) that easy labels won't do.  And it contains some truly dazzling playing from all the guys in the band, though Thile is usually so good that it's easy to forget that any one else is playing.

It's not a perfect recording for me—like I wish that there were a track or two that contained less fancy footwork and just let the guys PLAY—but it's not a perfect world.  Thile, Punch Brothers and Antifogmatic are making it a little better, though, I'll tell you that.